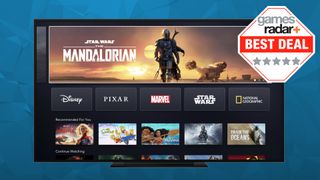 Disney Plus: everything you need to know
Find out what's on the service and why you should care right here.

The best Cyber Monday TV deals usually throw 4K screens and hardware at us for less, but this time a cheap Disney Plus Cyber Monday deal is taking the Mickey-shaped cake. For today only (Monday December 2, 2019), you can save $10 on your first year of Disney Plus. That means an annual subscription is just $59.99 instead of $70. The streaming service was already solid value for money because you'd save around $14 in the long run, so this offer is even more appealing than it seems at first glance - you're getting $24 off compared to a month-by-month subscription, basically. Just remember: it'll end after 11:59PM ET tonight.

As you may be able to tell from the Baby Yoda memes taking the internet by storm right now, Disney Plus is good enough that it's worth pouncing on any discount you can get your hands on. And it's not like there isn't plenty to keep you entertained, anyway; the service is doing very well for itself with a library of over 600 movies, documentaries, and TV shows, including live-action Star Wars series The Mandalorian. As such, this cheap Disney Plus Cyber Monday deal isn't one to miss. In fact, you may not get another crack at a cheaper Disney Plus sign-up for a while.

The main thing to bear in mind would be the fact that this offer is only available in the USA and Puerto Rico. In addition, you won't get a Disney Plus free trial with it. But hey - on the flipside, $10 off is a good incentive in and of itself.

It's not the only cheap Disney Plus deal out there, of course. The streaming service also has an offer on Disney Plus, Hulu, and ESPN+ for just $12.99 per month. That's the same cost as a single month of Netflix, and you're getting triple the amount of content for you cash. Similarly, Verizon are giving away a free year of Disney Plus with certain data plans - not to mention some very tempting free gifts. If those discounts are more your speed, you can check them out below.

Disney Plus, Hulu, ESPN+ | $12.99 per month
This tempting bundle offers something for all the family - you get three services for the same price as a month of Netflix.View Deal