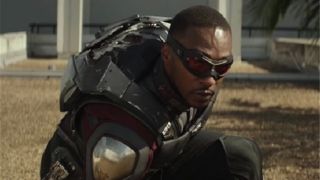 Fans have pleaded for a Black Widow movie ever since her ass-kicking introduction in Iron Man 2. They're not exactly alone in their demands - Captain America: Civil War directors Anthony and Joe Russo say it's a "no-brainer." At long last, Marvel's decision-makers are warming up to the idea. Studio head Kevin Feige says that of all the standalones, "the one creatively and emotionally that we are most committing to doing is Black Widow," and now one of Scarlett Johansson's cast mates has weighed in on the matter.

Anthony Mackie, aka Sam "The Falcon" Wilson, told Hitfix: “If they made a Black Widow movie, it would be more of a spy espionage-type movie, which would be great, to see a female James Bond or something like that.” That would certainly fall into Black Widow's remit. She really came into her own during the events of The Winter Soldier, the one movie in the MCU that's frequently referred to as a '70s spy thriller.

As for Falcon himself, he's made quite the impression since his debut, dropping into Cap's movies and taking a large supporting role in last year's Ant-Man. Would he be up for another second fiddle part? Oh yeah, Mackie's game. “I would love, in any capacity, to be a part of that," he adds. "I’ve always been a huge fan of Scarlett’s, and I’ve always, since I met her, just really admired her as a person. So in whatever capacity I would be used — Falcon would fly for Black Widow.”

'Falcon Flies For Black Widow'. I can just see it on the character poster now.