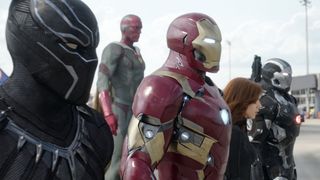 Captain America: Civil War hit store shelves today, and as you can expect, it's brimming with behind-the-scenes features and commentary. One thing you won't find, sadly, is an edited version of the airport fight scene with sound effects from Ultimate Marvel vs Capcom 3 dubbed over the original action. That's what the internet is for:

A little bit of editing fun.Was I the only person who thought then when watching Captain America Civil War? pic.twitter.com/2HT7ecrImbSeptember 11, 2016