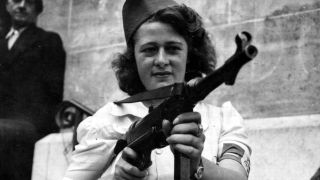 We already knew Call of Duty: WW2's campaign would include a segment starring a woman in the French Resistance, and now we know that won't be limited to the single player. Sledgehammer Games co-founder Michael Condrey confirmed to a fan on Twitter that female soldiers will be playable in multiplayer.

If your knowledge of World War 2 comes mostly from video games and movies, you might be surprised to hear that Sledgehammer plans to make women soldiers playable in Call of Duty: WW2's multiplayer mode. Weren't all the "boots on the ground" men back then? Well, no. You had the aforementioned French resistance, in which Simone Segouin (shown above) became famous as a saboteur. Then there was Liudmyla Pavlychenko, a Soviet sniper with an IRL kill/death ratio of 309:1. Not to mention the thousands of Polish women whose names were lost to history as participants in the ill-fated Warsaw Uprising of 1944.

There were obviously many more men than women on the front lines. But for a game that's concerned with action-packed dramatization rather than representative recreation (otherwise you'd spend hours waiting for deployment orders between each match) letting players choose who to play as sounds like a good call.

Call of Duty: WW2 will include the usual team deathmatch type stuff as well as extended multiplayer campaigns called, appropriately, War. We don't know how much characters can be personalized. For instance, will you customize separate Allied and Axis soldiers to play depending on which team you join or will it automatically distribute the uniforms as needed? We'll find out more when Call of Duty: WW2's multiplayer is properly revealed at E3 2017 in June.

Check out our Call of Duty: WW2 preview for more and learn about how it will portray some parts of the war you may not have seen before.