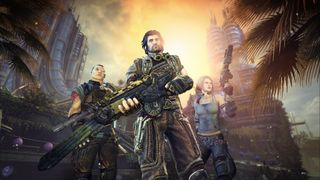 Every year at E3, journalists come away with around 17 USB sticks packed with assets from the show which are essentially redundant because every last image, video and packshot is on the internet the instant any game is announced anyway.

It looks as though the USB stick given to journalists at this year’s Xbox E3 event is the exception to that rule.

As reported by Polygon video editor Nick Robinson, the USB stick handed out at said event contains four images for a title called Bulletstorm Remaster. The game was not announced at Microsoft conference, nor (thus far) any other point this week – but four apparently official images would suggest it is very definitely real.

Uh, so… I just found a folder on an Xbox USB called "Bulletstorm Remaster." No mention of this anywhere online. Huh! pic.twitter.com/gmcHbb8t6CJune 14, 2016

The images all scream ‘current-gen’, and are of a significantly better quality than those used to promote the original game back in 2011.

Despite excellent reviews, Bulletstorm sold poorly and a sequel was canned by then-publisher EA just a year after the original’s release.

We’ll have more news if and when we get it.