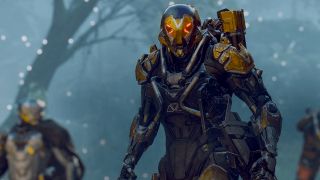 Bioware really, really doesn't want you to know much about the Anthem game story ahead of review. Not only have official details from the studio been light, but it turns out the team have gone out of its way to make sure there aren't any other ways of finding out more about what's going on in Anthem's campaign.

Speaking to Bioware Producer Thomas Singleton at an Anthem preview event, he said Bioware dedicated an entire team to "stripping" all story content from the recent closed alpha that happened in late 2017 to stop dataminers going in and revealing any spoilers whatsoever.

"The biggest job within that closed alpha before releasing it to the audience, was literally stripping out - we had an entire team dedicated to stripping [laughs] - all of the story content so no-one could mine it, and then share it," explains Singleton. "Because it's a spoiler. We want people and our fans to experience it for themselves for the first time."

It sounds like the upcoming Anthem demo will be much of the same too. Available tomorrow for VIP access holders, and for everyone next weekend, it's aimed at giving people a vertical slice of what the game will have to offer, with gamers dropped into the middle of the title, with one story mission available alongside some other activities like a Stronghold, and exploration of your base, Fort Tarsis.

It seems we'll have to wait until the game's February 22 launch to find out what's going on in the world of Freelancers.