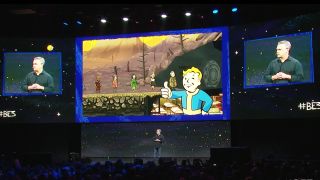 There were some great games in Bethesda's E3 conference. Zelda's in Skyrim for example. There a new Dishonored game called Death of the Outsider and The Evil Within 2 and Wolfenstein 2: the New Colossus both look amazing. Plus everything they'd showed is all out this year. As far as line ups for 2017 go that is not bad.

But: to hold a 45 minute conference to show mostly known games, DLC and bits at time that wasn't exactly convenient for most people hasn't exactly gone down well for some.

It's good to see people saw the funny side at least

Bethesda was only 40 minutes. I probably shouldn't have mainlined this coffee. I'm so alone now.Alone.June 12, 2017

And some are just plain pissed

#BE3 Bethesda you don't even want to know how pissed off I am right now that conference made me cryJune 12, 2017

And well, yes, Elder Scrolls 6 was never going to happen.

I love how people were expecting elder scrolls at Bethesda like wtf??June 12, 2017

"did bethesda announce elder scrolls 6 this year??" #be3 pic.twitter.com/yuthjqrhEJJune 12, 2017

Good to see that the paid mods are still popular at least. Oh, wait...

Don't get me started on the creation club stuff either. You tried paid mods before and it didn't work, Bethesda. #BE3June 12, 2017

Absolutely mind blown that Bethesda would open this paid mods can of worms again... good god.June 12, 2017

At least we can all agree on one thing though

Me: "No reason to buy Skyrim for the third time"Bethesda: "You can play as Link, with the Master Sword"Me: pic.twitter.com/kRVS5vJm93June 12, 2017