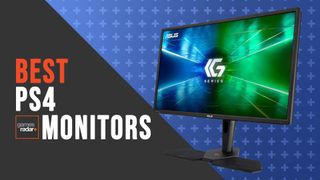 The best PS4 monitor money can buy will quite often overlap with the best gaming monitors  going - but this is not a bad thing. It just means that PS4 monitors reap the benefits of years of display honing that the gaming monitor market has trail blazed. What's more there's a genuine increase in demand for console-focused monitors as our gaming setups change and become more and more integrated.

So, you don't have to just plug your console into your home's main television, you can get a dedicated screen for it - and that itself shouldn't be limited to a TV even if it is one of the best gaming TVs. If you can get a monitor that offers other benefits like PC compatibility and features as well as being console gaming-focused, then it fast becomes a contender to be one of the best PS4 monitors.

We're at the stage where there are a few monitors that are clearly console focused and will immediately be contenders to be one of the best monitors for PS4, but some that are PC first, are actually very good candidates already. The ones for PS4s don't have to be stuffed with the latest and greatest, and fastest, screen techs that only one of the best gaming PCs can take advantage which means you can immediately save money by filtering out some of those super expensive and mega widescreen monitors that will just not be optimized for console play.

In terms of specifics, it should be said that you will be stuck with the native framerate that your PS4 or PS4 Pro, and the game itself, can manage - so a maximum of 60fps. Which will be a downside for many. However, this still means that some of the best 4K monitors for gaming will be a real possibility as they (generally) don't go above that level of refresh rate too. So while you can't expect to have incredibly high frames per second because you've got one of the best PS4 monitors, you can get a great, gaming-focused screen (i.e. not just a TV) that will have features beneficial to playing games, while avoiding the expensive premium-adding tech and resolutions that some gaming screens have.

This is a growing list and we will put large amounts of virtual currency on monitors being a really excellent shout to complement the imminent PS5 too, so let's have a look at some early contenders below, and be sure to know that this list will grow.

Best PS4 monitors at a glance

This is a seriously great monitor and one of the best I have reviewed for GamesRadar. The CG32UQ is a console-focused gaming monitor and has serious gaming pedigree and stock behind it coming from ASUS - who have monitors sprinkled through most of our best monitor guides.

It is a little expensive as it is still, in early 2020, relatively new but you still get some serious monitor, tech and performance for your money. Its main headline, if you will, is that it is a 32-inch 4K VA-panel monitor - this is incredibly useful, right off the bat, as it'll make transitioning from a 4K TV that many consoles are currently hooked up to, easy to undertake. You'll still get the same resolution and, extra importantly, the effects of HDR as the CG32UQ has a DisplayHDR 600 rating. This HDR excellence is backed up by glorious colors and contrasted gained by the monitor's 95% DCI-P3 rating and contrast ratio of 3000:1.

On top of that, you will still get some of ASUS's quality monitor techs as standard: FreeSync, GameFast mode, AuraSync lighting, flicker-free pictures, and a very handy remote control. For a full verdict check out my ASUS CG32UQ review, but this is definitely the best PS4 monitor you can buy right now.

If you're a fan of curved monitors for gaming then this is your best bet for a PS4 monitor with shape. This BenQ beaut is not a budget or entry-level priced model but the bang for buck its price tag represents is almost certainly worth it.

It has got a 1440p resolution which is not what console are designed for but the PS4 will work fine with it and doesn't look odd as its all at the right ratio still. Its 1800R curves nature really draws you in and heightens the immersion into games, and this would work perfectly for PS4. And, if you're prone to a bit of craning and head moving while gaming, the curved screen will give you more in the way of viewing angles too. It's also an HDR panel which will appeal again to those used to a modern 4K TV, though the EX3203R's is not of a stellar level. You'll also get a smattering of proper gaming monitor tech such as FreeSync 2 and BenQ's eye care focused techs which are genuinely useful.

Again, for more info you can check out my BenQ EX3203R review and see how enamored I was with it generally.

Yup it's another ASUS model, but you'd be hard pushed to find a better 1080p monitor for PS4 right now. This is because the image quality, and range and richness of color that comes for the VG279Q's IPS panel does an enormous amount of good work. The silver lining of that 1080p resolution is that the image work done by the IPS panel is not stretched over so many pixels so the clarity and crispness is exquisite. It also means that the ASUS VG279Q comes in much cheaper than a lot of its larger and flashier counterparts. Nice.

Like a lot of monitors, though, this is made with PC in mind first which means you get a whole host of extra goodies: FreeSync; low blue light; flicker free; and gamefast mode, to name but a few. These might not always be used when playing on console, but those that don't just keep themselves available, increasing the monitor's potential flexibility and versatility.

Razer's first foray into gaming displays is a great success. The Raptor is a 27-inch panel that has quality specs under the hood. An IPS panel with a 1440p resolution, it has a 1ms response time and 144Hz refresh rate. There's also a cool black design that has RGB in the stand - because of course it does - and a mesh material all over the back, much like you'd find on speakers. The traditional Razer-green cables contrast nicely with the black stand and monitor and are tidily kept in check at the back with cable guides, too. The ports will have you covered practically speaking too: along with the HDMI for your PS4, there's a DisplayPort, one USB-C, two USB 3s, and a good old headphone jack.

This is a terrific gaming monitor all in then, and one which has a quality of picture that alone makes it easy to recommend as a PS4 monitor. The screen's speed is fast and pacey for smooth pictures, the image quality is crisp and gorgeous, and the color range and contrasts are deep and immersive. It's a little pricey perhaps, but if you're looking to get a great PC monitor that can also be a great PS4 monitor for picture quality then this is it.