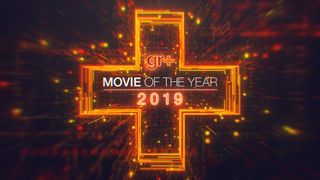 It's been a huge year for cinema. A saga over 40 years in the making came to an end. The Avenger defeated their biggest foe. And Cats... happened...

Whether you enjoyed the mega-franchise movies that dominated the box-office or the smaller tales told by indie-filmmakers, the Total Film team has watched them all. Below, we've rounded up the best movies of 2019, with our writers working tirelessly to bring you a list as definite as possible. Of course, there was a hard battle over the number one choice. But, in the end, there was one clear winner – a movie that resounded most with everyone who voted.

Before we head into our list, a quick note. Total Film's critics are based in the UK, and so we only looked at released that were available in the country. That means the likes of The Lighthouse, Parasite, and Uncut Gems – all movies that have won our hearts – do not feature on the below list. Without further ado, here the best movies of 2019. Enjoy!

25. If Beale Street Could Talk

What is it? Two lovers are ripped apart by an unjust justice system.

Why you should watch it? The novels of James Baldwin were shamefully under-explored during his lifetime. So Moonlight director Barry Jenkins’ faithful interpretation of his 1974 love story goes some way towards addressing this slight. The story begins in Harlem, the home of both 19-year-old, pregnant Tish and 22-year-old Fonny, her childhood friend turned lover. Tish longs to build a home with Fonny, a talented sculptor who’s in prison after being wrongfully arrested. Jenkins swaddles the young lovebirds’ burgeoning romance in a ravishing soft-focus shimmer that makes their later meetings amidst the grubby greens of a prison visiting room all the more heartbreaking. While not quite on Moonlight's level, this powerful tale was rightfully an awards contender earlier this year.

What is it? Melissa McCarthy forges autographs to pay rent.

Why you should watch it? Swapping her trademark pratfalls for literary crime and daytime drinking, Melissa McCarthy is a dowdy and determined revelation in this engaging true-life tale of author Lee Israel’s audacious '90s scam. Don’t mistake director Marielle Heller’s rich, melancholy character study Can You Ever Forgive Me? for a Life of the Party-style middle-aged makeover movie. Jeff Whitty and indie queen Nicole Holofcener's tack-sharp script is nicely nuanced about gay mid-life loneliness and last chances, with Heller wrapping a smoke-stained New York of dingy bars, bookstores, and chilly streets around the pair. The real delight, though, is in McCarthy and Richard E. Grant’s bitingly rude and funny fraudsters, two cynical losers finding refuge in one another. Grant injects a mix of charmer and rotter into Jack's hustling, but it's McCarthy’s prickly, vulnerable and bravely egotistical Lee who seals the film’s deal.

What is it? Shia LaBeouf plays his own father in striking autobiography.

Why you should watch it? The feature debut of documentary and music-video director Alma Har'el, Honey Boy is written by Shia LaBeouf, who draws on his own life (and plays a version of his own father) to tell the story of a child actor. The film takes place across two timelines, with Noah Jupe playing LaBeouf equivalent Otis in 1995, and Lucas Hedges playing the 2005 version who is working through his problems in therapy. It's an inventive, empathetic and emotional piece of work: LaBeouf gives one of his best performances as Otis' overbearing dad, and Jupe matches him every step of the way. One standout scene sees Otis watching a clip of his own show on TV at home, admiring the idealised on-screen father-figure that his own could never live up to. By turns funny, fascinating and heartbreaking, Honey Boy is artfully directed, but never at the cost of its humanity.

What is it? Aged director Mallo deals with past pains.

Why you should watch it? Pain and Glory frequently feels like the summation of a life's work. Pedro Almodóvar directs a movie that pulls from his own life, telling the tale of a famous filmmaker named Mallo. However, unlike Almodóvar, the character – played by Antonio Banderas – has stepped away from cinema after suffering through a laundry list of chronic afflictions, exhaustively detailed during an early animated montage. One day Mallo is informed that the Spanish Cinematheque are planning to screen a restored print of Sabor, one of his less celebrated films from the '80s, and the event’s planners want him to do a Q&A with the leading actor, who Mallo hasn’t spoken to for 30 years. Things erupt in Mallo's life, as former lovers return and the pains of growing old are brought to the forefront.

What is it? Awes-inspiring documentary about the moon landing.

Why you should watch it? Launched to coincide with the 50th anniversary of the moon landing, this utterly immersive documentary strapped you in the shuttle with Neil Armstrong, Buzz Aldrin and Michael Collins. Sticking with the timeline of the mission, and offering nothing in the way of narration, context or interviews, it was as close as you could get to going into space without undergoing astronaut training. What made the biggest impression was the stunning archive footage (some of it 70mm), which looked absolutely pristine on the big screen: eliminating the distancing effect that graininess can bring to period docs, it felt akin to time-travel. As breathless a spectacle as you could hope to see on the big screen, Apollo 11 also managed to extract seat squirming tension from one of the most famous events in human history.