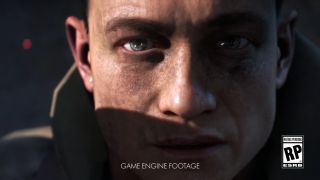 The next Battlefield will definitely have at least one human being in it. That's all I'm willing to say with 100-percent certainty after watching this new teaser from EA and DICE, giving a roughly four-second long look at the future of the successful shooter franchise.

The full reveal is planned for Friday, so we won't have to keep guessing for very long, but until then it is officially speculation time. The video is framed close on a dirt-caked face, but you can see a big khaki collar, too, and a noticeable lack of a helmet. Just going from general military uniform styles, I'm guessing this outfit comes from some time in the first half of the 20th century-ish. Or some time before collars receded and camouflage became standard-issue, at least.

You can also see some cinders wafting around, not to mention the shadow of some massive object rising to blot out the sun and unnerve our muddy hero. It could be anything, but I'm excited to learn more about what may be a return to the past - the last seven major Battlefield games were all set in the present or future, and Call of Duty: Infinite Warfare is clearly going in the opposite direction.