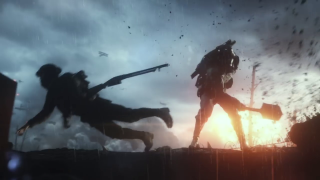 Pinch of salt time but it looks like some data mining of the Battlefield 1 closed alpha has given us a sneak peak at what’s coming in the full game. The leaked info includes single player levels, characters, multiplayer maps and modes, and guns. So many guns.

There are 10 multiplayer maps listed which you can see here:

There are also potentially 8 modes including Rush, Conquest, Team Deathmatch, Breakthrough, Domination, Possession and Air Superiority. There’s also a mention of a ‘Behemoth’ option but there’s a little uncertainty on what that might be.

In terms of single player characters we’ve got Pritchard, McManus, Finch, Townsend and Edwards revealed in subtitle files, sounding a lot like they’re pushing through trenches with talk of machine guns in windmills, artillery and lots of totting up kill scores.

There’s also 6 multipart single player episodes with names like Carry Your Friend, Hear The Desert and Out of Gas (I’m guessing that’s the tank crew we’ve seen in the trailer?). There’s some 40 plus guns listed too, mixing in familiar names like Lee Enfield and Mauser, with more exotic stuff like the Mars Automatic Pistol (at one point the most powerful handgun in the world) and the Lancaster Pistol, a sort of four-barrelled hand cannon.

Gadgets also get detailed and actually sound pretty standard, despite the period, mentioning grenades, mines, syringes and a rifle launcher which sounds like fireable grenade. And, while we knew melee weapons would play a bigger part, the outed list reveals quite a wide section of stabby, pokey things such as the hatchet, knife, sabre, shovel, bayonet, mace and a club.