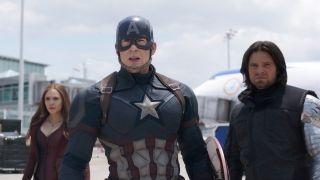 Poor Cap. He’s not had much luck, has he? First he has to go through that whole WW2 thing, then he gets frozen in ice, loses his best friend and then joins (and un-joins) The Avengers. And what’s coming next in Avengers: Infinity War sounds very final and definitive. One way or another, we’re probably saying bye-bye to Steve Rogers.

Speaking to The Telegraph, Chris Evans explains why he’s wrangled a one-movie extension to his contract, which confirms, at least, that Cap will play a part in Avengers: Infinity War and Avengers 4. “I had six films in my Marvel contract, so I could have said after the third Avengers I was done, but they wanted to make the third and fourth Avengers films as a two-parter.” He said. “They said they had so many other characters to fit in – Guardians of the Galaxy, Black Panther, Captain Marvel, Doctor Strange, Ant Man – and couldn’t get them all into one movie.”

How long do all the Marvel actors have left on their contracts?

Evans is obviously tight-lipped on his future but revealed he’s back for Avengers 4 “because it made sense. It’s going to wrap everything up.” It feels like only yesterday we saw the plucky young underdog from the streets of Brooklyn in Captain America. How quickly they grow up into super-soldiers. Sniff.

Avengers 4, then, could be the last time we glimpse Steve Rogers as Captain America – but at least Cap’s got two ready-made replacements in Bucky Barnes and Falcon should he decide to hang up his shield or, heaven forbid, bite the bullet.

Evans’ seventh – and possibly final – appearance in the MCU, is a far cry from his beginnings in the cinematic behemoth, revealing he had second thoughts about his bumper six-picture deal: “Because if things worked out, I’d have to do all six of them. And at the time, that was the most terrifying aspect of it. That it was going to be so dominating, all-encompassing.”