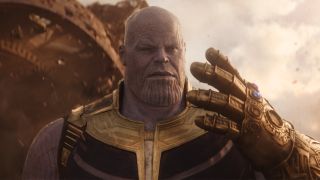 The Marvel SDCC 2019 panel may be tomorrow, but already San Diego Comic-Con goers have been treated to a mountain of Marvel news. First, there were the Avengers: Endgame writers taking to the Hall H stage to discuss their work on the superhero blockbuster. Then, after a quick pause, The Russo Brothers took to the stage, revealing even more information about Endgame and Infinity War, and our Total Film team were on the ground in Hall H to hear it all.

A return to Marvel

Marvel movies and The Russo Brothers go together like Captain American and Mjolnir, so it should come as no surprise to learn that the duo would “love to work” with the superhero studio again. Avengers 5, anyone?

The duo also revealed during the panel that Infinity War was the most stressful movie to direct, while Winter Soldier, their first for the Marvel universe, was the least stressful.

Coming up with the dust

When working on Infinity War, the “dusting” of half the universe was the hardest effect to conceptualise for the directors. On Endgame, meanwhile, the time portals and Professor Hulk took the longest time to get right.

One of the biggest and most popular Marvel comics storylines was Secret Wars. However, despite many fans wanting the comic-book arch to come to the big screen with alternate versions of Captain America and Iron Man, Joe Russo said: “No, not possible.” Still, a Secret Wars storyline could happen without them, right?

Questions from the Avengers

Some of the Avengers themselves were on hand (via Skype) to ask some questions to the Russo Brothers. Mark Ruffalo asked whether, now that Bruce Banner has merged with the Hulk, he has become both the smartest and strongest Avenger. The brothers decided not to answer, leaving that to the audience.

Captain America actor Chris Evans asked what did Captain America do after returning the Infinity Stones? “Go to the bathroom,” joked the Russos, before saying that the First Avenger likely tried for a baby with Peggy Carter. Another possibility may have been Cap heading to save Bucky from Hydra.

The brothers also joked about which actors ruined the most takes, revealing that Anthony Mackie and Mark Ruffalo would laugh the most on set. Scarlett Johansson, meanwhile, was the person to nail the most takes in one.

Continuing with the Avengers making guest appearances, Chris Hemsworth asked whether he would make a better leader of the “group prevously known as the Guardians of the Galaxy” and pretends to forget Star Lord's name. Paul Rudd also video-called in to ask, “If you had to rank best America's ass, who would it be?”

With a more serious question was Robert Downey Jr. The Iron Man actor asked what the difference between his iconic “I Am Iron Man” delivery in the first Iron Man, at the press conference, and the same line to Thanos in Endgame. Anthony Russo answered by saying Iron Man was in a completely different place at the end of Endgame, with the genius playboy having gone through a huge story arch and now having a daughter.

The brothers announced that they are working on a new movie. Titled Cherry, it stars Spider-Man actor Tom Holland, who appeared via a video message and spoke about being excited about working with the duo again. The film will be R-Rated.

They also revealed they are producing a movie adaptation of the comic-book “deep cut” Grim Jack. The eponymous character, who first appeared in the Starslayer comics in 1983, was a favourite of the Russo brothers as they were growing up.

They are also producing, and potentially directing, a version of Battle of the Planets, which itself is an Westernised version of the Japanese anime Science Ninja Team Gatchaman. If the Russo brothers do direct (they are still unsure), then it will be a live-action adaptation. The original series followed a group of five young orphans, trained from a young age to form an intergalactic team known as G-Force.

They also revealed the logo for their forthcoming Netflix series, and revealed they are producing a new version of the heist film The Thomas Crown Affair with Michael B. Jordan.

Finally, there's also 21 Bridges, which they are directing. Starring Black Panther actor Chadwick Boseman, a new trailer for the film was unveiled at the event and has been made available online.

To finish off the panel, the duo played the trailer for the home release of Avengers: Endgame. However, rather than feature too much new footage, the video was instead composed of multiple behind-the-scenes clips.