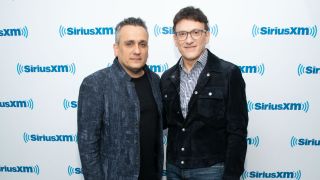 The Russo Brothers are stretching their legs post-Avengers: Endgame. As revealed during their Endgame panel, one of the most hotly anticipated in the San Diego Comic Con 2019 schedule, the pair are going to be working on another comic book movie - as producers on Grim Jack. That's just one of several movies and projects announced by Anthony and Joe Russo during the SDCC 2019 event.

Never heard of it? Don't fret, as even the Russos themselves say it's a "deep cut" that they just happened reading and love when growing up. It was originally published by First Comics and stars John Gaunt (aka Grimjack) who fights, scratches, and claws his way up the grimy, gangster-filled ladder of the Pit, a series of slums that permeate the cyberpunk-city world of Cynosure.

No release date has yet been given for the project, and it's worth pointing out that neither Anthony nor Joe Russo have signed on to direct. The Russos also have a bunch of other productions in the pipeline, including The Thomas Crown Affair (which they'll be producing with fellow MCU alumni Michael B. Jordan), and a Battle of the Planets remake.

The directorial duo have recently set up AGBO, a production company that will oversee many of the projects that have been announced during the Russos' SDCC 2019 panel.

So, some hopes and dreams of an MCU comeback may have been dashed at SDCC. The Russos have previously told GamesRadar that they had no plans to make any more Marvel movies. Sob.

For more on everything coming out of SDCC 2019, be sure to check out our ever-expanding San Diego Comic Con 2019 trailers hub.