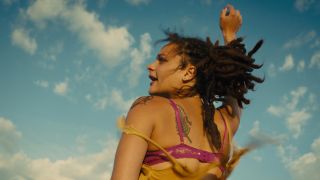 The hedonistic life of America’s disaffected youth rarely feels as vital as it does in American Honey. Andrea Arnold’s highly-anticipated fourth feature is a 162-minute road movie that resolutely defies convention. Narrative arcs, dramatic impetus and anything resembling a traditional three act structure are all non-existent. In their place: an intoxicatingly hypnotic cycle of music, door-to-door magazine sales and midnight parties. It’s astonishing.

We first meet Star (newcomer Sasha Lane) fishing food out of a bin with two children. They aren’t her own, but she cares for them as if they are. In a supermarket across the street she catches the eye of Jake (Shia LaBeouf), a self-styled businessman who semi-ironically wears pin-stripe trousers, a ponytail and braces. As Rihanna’s lyrically and melodically perfect “We Found Love” pumps through the store’s speakers, Jake hops on the counter and performs a millenial mating call while Star watches, transfixed and immediately taken.

This electrifyingly romantic meet cute inspires Star to abandon her life and run away with the “mag crew” - a group of around a dozen teens and twentysomethings who drive from motel to motel in a big white van, selling magazine subscriptions by day and partying around makeshift bonfires by night. There are rules enforced by the crew’s cutthroat queen bee, Krystal (Riley Keough) – namely no relationships in the group and no slacking when it comes to the work – but otherwise they live carefree lives of kinship and adventure.

And that’s almost entirely it as far as story is concerned. Arnold, apparently unaware of the concept of Chekov’s gun, constantly sews the seeds for melodramatic payoffs that never materialise. At one point a gun is actually introduced, the film threatening to turn into Spring Breakers before the firearm is forgotten about minutes later. Another scene sees Star accept money to “hang out” with an oil field worker. You’re braced for a harrowing outcome, but in its own strange way the consequences are quite tame. This happens constantly. American Honey’s heavily improvised script is largely aimless and listless as a piece of storytelling, but it’s refreshingly true to life, which rarely deals in neat dramatic crescendos.

That staggering 162-minute runtime will deter some, but it’s an integral element in what Arnold is trying to achieve. Lengthy scenes of the crew engaging in spontaneous hip hop sing-a-longs or chatting to truckers about their families in order to flog a few sailing magazines could be cut with no impact on the narrative whatsoever. But the repetitive nature of their lives, where only the occasional fresh face among the crew can distinguish one week from the next, greatly adds to the sweaty, eternal summer atmosphere.

The finite lifespan of their careers is never commented upon or questioned, they’re living full-blooded in the moment. Neither does the movie judge the life Star and the crew have chosen for themselves, even as they commit petty thefts in the homes they’re invited into. Rather it celebrates their unmistakable connection to each other and the world around them. Music fuels their every waking moment. Indeed, at times, the film feels like a musical. Rae Sremmurd’s “No Type” with it’s anthemic chorus “I make my own money so I spend it how I like” is treated like a way of life. Brilliantly, Arnold pulls a rare trick and revisits most songs multiple times, because who doesn’t listen to songs they like over and over again? The film’s only major on-the-nose musical choice comes when the entire van wholeheartedly bellows Lady Antebellum’s American Honey – an oddly meta moment, especially given how at odds the song is to their choice of music to that point.

Shia LaBeouf may be better known as a meme-generator than a serious actor nowadays but here he’s stellar, finally making good on the promise that saw him shoot to the top of Hollywood's most wanted list. As Jake he's magnetically charismatic, manically unpredictable and charmingly mischievous. He has an alchemical connection to Lane who dazzles in her screen debut. Their complicated romance is unconventional to say the least – passionately physical one minute, childish and antagonistic the next. And where any other film would have punished Star for abandoning her wards, American Honey is only interested in revelling in her freedom both as a woman, and as an 18-year-old. Lane’s steely resolve is tempered by the optimism of a wide-eyed dreamer who's more affected than she cares to admit by her tough upbringing. We’re not given much insight into the rest of the crew – most barely speak – but through their behaviour, song choices and dance moves we get to know them surprisingly intimately.

It won’t be to everyone’s tastes. In fact, it may not be to most people’s tastes, but it’s impossible not to admire Arnold’s achievement. An astonishingly singular and uncompromising vision, American Honey richly deserves recognition, and will surely scoop at least one major award at this year's festival.

Jordan is the Community Editor at SFX and Total Film. When he isn't watching movies or sci-fi shows of questionable quality he's probably shooting men in space or counting down the days till the next Zelda comes out.