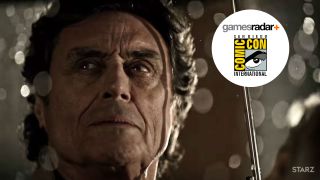 Years and YEARS of chatter and the adaptation of Neil Gaiman's superb novel American Gods is actually happening. The tale of old vs. new gods stars Ricky Whittle as Shadow Moon, an ex-con who goes to work for a mysterious figure named Mr. Wednesday and quickly becomes caught up in a battle of the deities. Want to know more? Check out the first trailer straight out of San Diego Comic Con:

Starz snapped up the rights to the series last year, and got the ball well and truly rolling by enlisting two genre maestros, Hannibal's Bryan Fuller and Heroes' Michael Green as showrunners. Anticipation for the series has been steadily building since, and this trailer doesn't disappoint.

It doesn't give away much of the plot, but enough of the overall mood and tone come across nicely. A touch of black comedy, drama... and uhh... some crazy-looking gods with fiery eyes.