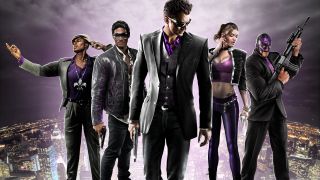 A new Saints Row is currently in the works that will be the first fully fledged entry in this series since Saints Row 4 came out back in 2013. News about the next game in the series was revealed in THQ Nordic’s latest financial report, which states that the studio behind the Saints franchise Volition is already “deep in development.”

While it doesn’t reveal any projected release date or title, the fact that it’s “deep” into its development process could suggest it’s not so far off. It’s been six years since we last got stuck into the over-the-top action with the Saints as they went up against alien invaders, but we don’t know how long Volition has been working on the next title. After you’ve become the President of the United States who gets hurtled into a virtual world to fight the alien emperor Zinyak, the possibilities of what might come next is anyone’s guess.

Volition's most recent offering came in the shape of Agents of Mayhem, an open-world adventure where you play as a superhero. While it had a lot of the studios trademark humour and rather silly action, it was generally thought to be quite disappointing when it released back in 2017. Still, with the studio returning back to its roots with the Saints series, a fifth instalment is welcome news to Saints fans everywhere.

Want to know what else is in store? Check out all the upcoming new games 2019 and beyond.