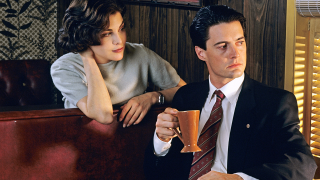 Mark Frost, co-creator of Twin Peaks, doesn’t get enough credit. David Lynch is widely regarded as the mastermind behind the cult supernatural soap opera, but Frost is the one who took his surreal, abstract ideas and created a mythology out of them.

With the show set to return in 2017 for a third season, Frost has released a new novel, The Secret History of Twin Peaks, which expands on this mythology through a series of classified government documents, letters, diaries, newspaper articles, and other ephemera.

And true to the spirit of Twin Peaks, it’s a labyrinthine web of mysteries, contradictions, and tantalising clues, which may hint at the direction the new season will take when it returns to our screens after a 25 year absence.

The secret: A gold ring with a jade stone and the Owl Cave symbol carved on it plays a major role in Twin Peaks: Fire Walk With Me, the film Lynch directed after the show’s cancellation in 1992, which ties up some of its loose ends in typically cryptic fashion. It has some connection to the Black Lodge, and Laura Palmer was wearing it when she was murdered. In the book it’s revealed that the ring was given to explorer Meriwether Lewis by Twisted Hair, chief of the Nez Perce, a tribe of Native Americans who lived in the region that is now Twin Peaks.

The chief said the ring was a gift from a tribe of ‘white Indians’ who lived in the area, despite the fact that Lewis’ group were the first white men to explore this part of the New World. Everyone who has worn the ring has had some encounter with the Black Lodge, directly or indirectly, and previous owners include occultist Aleister Crowley and disgraced President Richard Nixon. Although its exact properties are unclear, it’s a powerful physical link between the real world and the spirits of the Black Lodge.

What it could mean for the show: In a Fire Walk With Me deleted scene, a nurse rushing Annie Blackburn to the hospital after the events of the season two finale steals the ring and puts it on her left ring finger. So it’s likely that the ring is still in Twin Peaks, and may play a part in the new season. A popular theory is that the ring protects the wearer from being possessed by BOB, which will come in handy if he’s still lurking in the town.

The secret: Dougie Milford is introduced in season two. He’s a fairly unimportant, comical character who fights with brother Dwayne over the affections of Lana Budding. But, surprisingly, he’s one of the main characters in The Secret History of Twin Peaks. Much of the book is dedicated to exploring his eventful life, from his days in the military to being the publisher of the Twin Peaks Post newspaper.

Milford was employed by the US Air Force to study and debunk UFO sightings. But he later realises that the mysterious events he’s been secretly investigating for most of his life are not signs of extraterrestrial life. Rather, they’re manifestations of the spirits of the Black Lodge.

Curiously, when he dies in season two, we see a ring on his finger that looks suspiciously like the Owl Cave ring. But this was introduced in Fire Walk With Me, so either it’s a coincidence or Frost knew Dougie was an important character all along. When asked if it was the same ring at a book signing, he replied “Wouldn’t it be interesting if it was?” What a tease.

What it could mean for the show: A running theme in the book is that the US government are fully aware of the powerful forces that dwell in the woods around Twin Peaks. Public investigations into UFOs, like Project Blue Book, were a smokescreen to hide their true intentions. So it seems likely that they’re still investigating the Black Lodge, and perhaps trying to tap its power, which will likely figure into season three somehow.

The secret: While camping in the woods near Twin Peaks as a boy, Dougie Milford saw a strange towering figure watching him from afar through a raging storm. Elsewhere in the book there’s a mention of nine-foot-tall skeletons being dug up by archaeologists in the same region And, of course, Cooper encounters a giant several times in season two, who seems to be one of the friendlier Black Lodge spirits.

It’s ambiguous, but the suggestion seems to be that these giants may be the ‘white Indians’ described by Twisted Hair. If these other giants are, like the one Cooper meets, benevolent in nature, perhaps they gave the chief the ring as a form of protection. Whatever the case, giants seem to loom large in the Twin Peaks mythology. Part of the book describes the Owl Cave mural, and makes a point to mention the giant-like figures depicted on it.

What it could mean for the show: Carel Struycken, the actor who played Cooper’s giant, is confirmed to be reprising his role in the new season. So we’ll definitely be seeing the return of these strange spirits. And now we know there could be more than one of them, at least according to Twisted Hair, perhaps we’ll see others. Let’s hope they’re still friendly.

The secret: The Bookhouse Boys were formed in 1941 just after America joined World War 2, to protect Twin Peaks from possible invasion across the border. The group was put together by Sheriff Frederick Truman, father of Harry S. Truman, and they took their name from the small school library they used as their headquarters, as seen in the show.

Years later, during the events of Twin Peaks, the Bookhouse Boys are still going strong. Only now they’re a secret society protecting the town from the mysterious “evil in the woods”, of course referring to the Black Lodge. Members include James Hurley, Tommy Hill, Ed Hurley, and Cooper is the first non-resident to become an honorary member. They’re an important part of the town’s history, often being called into action when something needs to be done that falls outside of the law.

What it could mean for the show: Sadly, Michael Ontkean won’t be returning as Harry S. Truman in season three. A real shame, as his relationship with Cooper was one of the highlights of the show. But it seems likely that the Bookhouse Boys will still be active. The darkness surrounding the town is still there, despite Laura’s killer being unmasked. And they’ve been around since the ‘40s, so it’s safe to assume the town’s younger generation will carry the torch.

The secret: It’s taken 25 years, but one of the many maddening cliffhangers left dangling at the end of season two has finally been resolved. You may remember Audrey Horne handcuffing herself to the vault in the Twin Peaks Savings & Loan bank, just as Andrew Packard unwittingly triggered the bomb left for him by his old rival Thomas Eckhart.

The book reveals that Audrey survives, but is badly injured, while Packard, Dell Mibbler, and Pete Martell are all killed. Pete’s death is especially sad, but perhaps necessary after the tragic death of the actor who played him, Jack Nance. Although Frost does suggest in the book that the reason Audrey survived is because Pete jumped on her to protect her. A fittingly heroic end for one of the series’ most beloved characters.

What it could mean for the show: Audrey, played by Sherilyn Fenn, will definitely return in season three. But the extent of her injuries is unknown. The book mentions her father Ben Horne (also set to make an appearance in season three) sobbing by her bedside, implying they must have been serious. What state this leaves her in now is unclear, but it’s good to see the Horne family returning, even if poor old Pete didn’t make it.

The secret: Jack Parsons was a rocket scientist who was part of occultist Aleister Crowley’s Thelema religion. And Devil’s Gate, a rock formation in Pasadena believed by some to be a portal to Hell, was allegedly the location of a ritual he performed to summon a demon. This is one of many examples of how Frost cleverly weaves the show’s mythology into obscure real-world history in the book.

Dougie Milford was investigating Parsons, and visited the rock. He was overcome with an “animalistic fear” of the same kind he felt when visiting Glastonbury Grove in Twin Peaks, which we know is an entrance to the Black Lodge. Parsons “danced too close to the flames” and “summoned a fire demon”, which sounds a lot like BOB. And the fact that his ritual contains the line “The magician longs to see” is a direct link to the Fire Walk With Me poem heard several times in Twin Peaks.

What it could mean for the show: This seems to confirm that Glastonbury Grove, the strange formation of sycamore trees around a pool of black oil in the woods around Twin Peaks, is not the only entrance to the Black Lodge. There may be others, and this could be a part of the story in season three. Milford seems fearful in the book that whatever the Black Lodge is, it’s growing in power. “We are utterly incapable of knowing their intent.” he writes in a private letter. Maybe we’ll find out.

The secret: Major Garland Briggs, father of Bobby Briggs, is evasive in the show about why exactly he’s in Twin Peaks. “That’s classified” he says, even to his own family. But in The Secret History of Twin Peaks we learn that Briggs was hired by Milford to be his successor in investigating the Black Lodge. High on Blue Pine Mountain, one of the titular twin peaks, is a government facility called Listening Post Alpha, which was built to search for signals emanating from the woods around the town.

After complaints from the public about the construction of the base, the government creates a cover story, saying it’s part of Ronald Reagan’s infamous ‘Star Wars’ project. But the truth is that it’s part of their ongoing investigation into the Black Lodge, of which Briggs and Milford were a crucial part. One of the messages received by the station is part of the storyline in season two. Briggs confides in Cooper because the message seems to be directed at him (“The owls are not what they seem.”), but otherwise very few people know of its true purpose.

What it could mean for the show: It’s safe to assume that Listening Post Alpha still exists up on Blue Pine Mountain. And the fact that it can communicate with the Black Lodge makes it an important location. Although it remains to be seen whether the government is still operating it after 25 years. Don S. Davis, who played Major Briggs, sadly died in 2008, so if the base is still functional, it’ll most likely have a new commander.