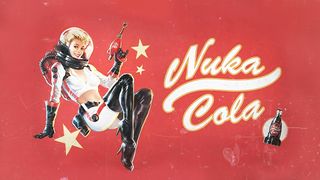 Video games are stuffed to bursting with fake brands. Most are forgettable, throw-away plot devices - Evil Corp, Joe's Italian Restaurant, Richard's Prophylactics - but some are so believable and well-loved that they've entered our consciousness. They're more than window-dressing. We buy into what they're selling, and almost feel surprised that they don't exist in real life.

The GTA games are the undoubted masters of fake-products, mostly because their sexual innuendo-heavy brands fit so perfectly into each parody-rich city. So you'll see plenty of GTA entries in this list, along with a few other firm (GEDDIT? As in 'business firm', yeah? YEAH?) favourites.

Sprunk is a lemon and lime energy from the GTA games, containing a lethal mixture of sugar and caffeine claimed to be ten times more concentrated than its rivals. Not that we see any of Sprunk's rivals in the GTA games. Obviously, the name Sprunk is a combination of Sprite and spunk (if you don't know what that is, were not going to tell you - ask your mother), and some of the advertising you see around GTA's cities only serves to reinforce the joke. A taste of things to come says one billboard in San Andreas. Well, quite. You'll find lashings of Sprunk in every good vending machine in GTA, and its served at Cluckin Bell too.

Abstergo is a modern company set up as a front for the nefarious activities of the Templar order in the Assassin's Creed mythology. It's described as one of the most powerful and sizeable companies in the world, although until recently no-one has actually been able to identify what it does (aside from act as a Templar front). Does it simply produce 'evil'? One branch of the business, Abstergo Entertainment, is involved in creating virtual reality experiences, using Animus technology as a fully interactive video game. That's the friendly face of it, anyway. What's actually happening, is that Abstergo is using the more commercially available Animus technology to gather memory information from the general public, and recruit a Templar army to destroy the Assassins Order.

According to the sales pitch from Vladof, one of our favourite manufacturers in Borderlands: the time to stand up and be heard is nearly upon us and you must be prepared. You must be armed! Vladof firearms were designed for this moment in time. It's all very communist Russia, only in space, and with thousands of different weapons to choose from. Vladof weapons promise a high rate of fire over short and medium distances, and they can pack a huge punch if you find some of the rarer guns. Little is known of the company itself, although the CEO is - somewhat unimaginatively - called Comrade Vladof.

Another GTA brand, this one being the series alcoholic beverage of choice. Aside from being an amusing name (literally: piss water), it's also a barely concealed joke about how European's view many American lagers as being weak as piss. Or at least it did before the US fixed its beer game several years ago. Advertising for Piswasser takes the metaphor that one step further, and features a girl squatting suggestively over the bottle. Always keen to take its brands as far as possible, Rockstar even made hundreds of crates of real-world beer, labelled it as Piswasser, and sent it to media outlets as promotional material for GTA 4. As far as we can remember, it was fairly tasty as lager goes. At least, we hope it was lager...

You know Aperture Science - the Michigan-based company responsible for inventing the Aperture Science Handheld Portal Device (and a bunch of other stuff). Founded in 1947 by Cave Johnson, Aperture has always been at the forefront of cutting-edge, yet utterly fictional, science. While the Portal gun is undoubtedly the company's biggest achievement, it also invented several types of unusual gels, aerial faith plates, and of course the Weighted Pivot Cube (or as we call them, Companion Cubes). In May 1998, the rogue AI GLaDOS took over control of the company and the rest is, well... you've played Portal and Portal 2, right?

Thanks to the discovery and industrialisation of ADAM, Ryan Industries thrived in BioShock's underwater city, Rapture, by offering ordinary Joes and Janes the chance to be extraordinary. How? By selling Plasmids. You know how Plasmids work - they offer super-human abilities that range from basic telekinesis to shooting swarms of angry bees from your bare hands. We're not entirely sure what the everyday, domestic use of killer bees is, but hey ho. Founded by Andrew Ryan, Ryan Industries employed brilliant scientists like Brigid Tenenbaum to harness the potential of ADAM for commercial use. This spun off other products within the BioShock universe, such as Vita Chambers and Tonics. Inevitably, Ryan's commercial success lead to a bitter war with rival Frank Fontaine, which ruined the entire city on New Years Eve, 1959.

Where GTA has Sprunk, the choice of soft drink in Fallout's wastelands is Nuka-Cola. Its one of the few brands still remaining after the destructive nuclear war that consumed Fallout's world, and you'll even visit the factory where it used to be bottled in New Vegas. Before the Great War, it was the most popular soft drink brand on earth, having been invented by John Caleb-Bradberton in 2044. Its blue bottle caps are even used as currency in Fallout's world, and there's a special reward for hardy adventurers who track down a haul of Nuka Cola Quantum caps. Other forms of Nuka-Cola available include: Clear, Quartz, Victory and a number of different flavour variants, which appear exclusively in Fallout: Tactics.

According to WipEout lore, 2036 saw the founding of the Federal European Industrial Science and Research company (yup, that spells FEISAR) to investigate anti-gravity technology. Very admirable. Obviously, by 2048, this potentially ground-breaking research was being used for flashy, futuristic racing. Some of you may be wondering why we picked Feisar, as opposed to any of the other - potentially sexier - race teams from the WipEout series. Well, it's one of only two teams to feature in every game in the franchise, the other being Auricom. Auricom sound like they make cheap computers and washing machines, so we favoured Feisar. Sadly, none of the brilliant fictional minds who have worked at Feisar were able to figure out why there's a capital 'E' in WipEout.

It may not be one of GTAs biggest brands, but its definitely one of the cleverest. And it makes us laugh. TW@ is a chain of internet cafes dotted around Liberty City, and yes, the name is another sexual innuendo, created by smart use of the @ symbol. Again, if you don't get the joke, were not going to explain it to you. Interesting fact about the TW@ internet cafes in GTA 4 - if you logged into their computers, you'd get adverts for Life Invader, the social network site that features heavily in GTA 5. Rockstar is a master at re-using brands to create a persistent world that runs across all its games.

While not being the best-known fake brand, Ultor is one of the few that transcends games. It was originally conceived as the evil mining corporation in the futuristic Red Faction games, but has also played a large role in the modern day Saints Row games. Ok, so its the same developer - Volition - that makes both franchises, but we still think it's a damn clever idea. It's a heavy-handed law enforcement group in Saints Row, and there are several cute little allusions to the future of the company in games 2-4. More like this, please. Although not in real life, because they're pretty evil.

Do you know what's in that burger / hot-dog / chilli that you're currently shovelling into your face? No. Well, if it's a Rupture Farms product (which it isn't, because the company doesn't exist) it probably contains Mudokon. Or if you're very lucky, a near extinct Meech. During Abe's Oddyssey the Rupture Farms company was shut down after our hero - Abe - discovered that he and his fellow Mudokons were due to become the latest product New'N'Tasty. Company CEO, Mullock, is currently in hiding, presumed dead. We wouldn't rule out his return in a future Oddworld game, though. Remember: always read the label.

Ah, Umbrella - arguably gaming's most well-known brand. Umbrella Corporation was founded in 1968 by Edward Ashford, Oswell Spencer and Dr James Marcus, and its first product was the Progenitor Virus, which was intended as a cure for cancer. Sadly, the peaceful intentions of early Umbrella quickly turned sour, and before long the company was an evil corporation creating weaponised viruses for shady PMCs. The company has (or had) several research facilities throughout the globe, and may well have a load more we don't know about depending on how many more Resident Evil games Capcom intends to make. Its the only fake brand in gaming to have a whole, AAA game named after it: Resident Evil: Umbrella Chronicles. Impressive.