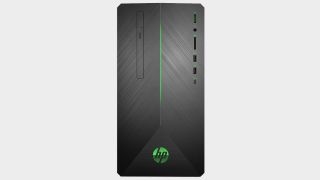 Because building a gaming PC from the ground up can seem like a daunting job, cheap gaming PC deals like this can be a really strong starting point. You might lose some of that immediate satisfaction from building your own, but some folk would prefer the building element to be done by someone else and to buy a pre-built gaming PC that's ready to go straight out of the box. It's a particularly good option for less-powerful machines or those PCs geared toward a first step into all things PC gaming. And right now there's a bargain to be had: you can get an HP Pavilion gaming PC with an i5-9400F processor, a GTX 1660Ti graphics card, 8GB of RAM, and a 256GB SSD for just $599 at Walmart. This is a reasonable price and also this machine's lowest ever cost, so definitely worthy of consideration.

Walmart says there's only two left in stock but fear not, as there are other sellers on there, some even offering it for a few bucks less! So, should Walmart themselves run out of stock, these links will still work for you and get you to the right place.

The downsides are few, but should be taken note of, just in case. The amount of RAM is probably fine, but may be in need of upgrading sooner rather than later. Meanwhile, the storage solution would also have to be addressed (however, as it's a PC, you should be able to boost it with external storage solutions). As for the mouse and keyboard, they're going to be pretty average at best so you're better off keeping them for emergencies or using them until you can identify the best gaming mouse and the best gaming keyboard for you (and while you're there, don't forget one of the best gaming monitors either).

Although we don't know too much about the make of the motherboard, power supply, etc, the machine is very well reviewed, comes with seemingly-decent customer support and a one year warranty, which all help with peace of mind.

All in all, this is an exceptionally good price for a decent gaming PC. It's not a mega powerhouse, but it won't struggle with any modern games either.

Fill out your research on gaming machines by checking out our guide to the best gaming PCs going.