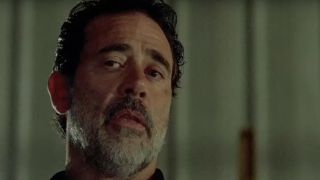 The Walking Dead season 7 is heading into its final stretch of its first half (yes, that sentence makes sense!) with another episode that has the potential to visit an iconic moment from the comics. The last few weeks have seen the plots diverge, as the show checks in with the scattered gang of Rick's survivors.

This coming episode appears to be zoning in on Rick's scavenging as well as the Saviors' homebase. Scope out the trailer below for Sing Me A Song:

Negan's ominous voiceover is full of pomp and self-importance. As you might expect from a man who thinks homicide is the best way to prove a point! While it's nothing we've not heard before, it's the fact that it takes place inside the Saviors' sanctuary and the title that makes it intriguing.

Sing me a Song hints at a part in the comics when Carl hikes a ride into the sanctuary and winds up killing some Saviors and becoming Negan's weird lapdog. Negan forces him to "sing me a song." We may get to see elements of that translated to the small screen. That means badass Carl, who I much prefer over whiny Carl.

The season has, so far, delivered an inconsistent batch of episodes. We're nearly at the halfway point and it's about time the show picked a path and stuck to it. Don't get me wrong; investing in all those characters is a way keep us tuning in, but there needs to be a little more glue holding it all together. Question is, will next week's instalment deliver?