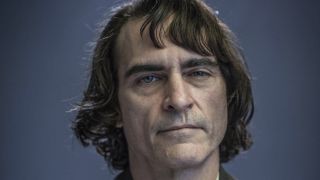 If Jared Leto's portrayal of eternal Batman archenemy the Joker looked a bit like a heavily-tattooed Juggalo, the version of the character that Joaquin Phoenix is set to play in the upcoming Joker origin movie is the polar opposite. He's... well, take a look for yourself:

That picture comes courtesy of the film's director, Todd Phillips. The caption, "Arthur," seems to be the clown prince of crime's real name, at least if a report from That Hashtag Show is correct. According to THS, Joaquin will begin the film as "Arthur Fleck," a down-on-his-luck man who returns to Gotham to be with his ailing mother.

Feel free to take that rumor with the biggest grain of salt you can imagine - first of all, any details regarding an upcoming movie's plot should be treated with utmost skepticism, but secondly, Joker's origin has always been incredibly nebulous. Or as the character himself says in the graphic novel Batman: The Killing Joke:

Personally, Warner Bros., Phillips, and Phoenix are going to have to sell me really hard on the idea that this is a movie I need to see. Some things work better without an origin story, and Joker is one such creature, in my opinion. But what about you? Do you think this looks like a man that could go on to become Batman's greatest enemy?

Hyped or not, the Joker movie continues to make progress. Which is more than we can say for The Batman, the solo movie starring... well, Batman. That movie is not doing so well.