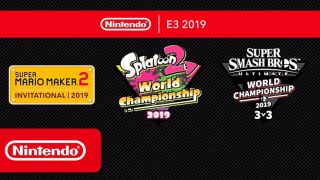 This year's Nintendo World Championship is set to broadcast in the US and UK on CBS August 25, as part of a partnership with CBS and the television show, ELeague. The original event was streamed just before E3 2019, and was later uploaded in its entirety to Nintendo's official YouTube account. This won't be the first time a gaming event aired on a broadcast television station - the 2018 Super Smash Bros. Ultimate Invitational aired on TBS last November - but the Nintendo World Championship coming to CBS is still a good indicator of the growing prevalence of the eSports category.

2019's Nintendo World Championship featured three of Nintendo Switch's most popular multiplayer games: Splatoon 2, Super Mario Maker 2, and of course, Super Smash Bros. Ultimate. Competitors battled it out in their respective categories to earn the championship. The entire event spanned nearly seven hours and will be broken down into three "episodes" when the broadcast airs on CBS later this month.

Training for the next Nintendo World Championship. Find out how to quickly unlock every Smash Bros. Ultimate character and, most importantly, win.