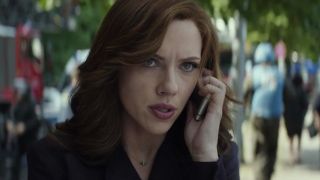 Nearly every Avenger – and non-Avenger – has gotten a Marvel standalone movie at this point but Black Widow, there from the very beginning, hasn’t had a solo outing as of yet – despite being well-suited for it. However, Scarlett Johansson shares your frustration and tells Total Film that a Black Widow movie is coming, if she and Marvel can find time in their busy schedules.

Speaking to Total Film Magazine for its Ghost In The Shell cover feature, ScarJo took time to talk about a possible Black Widow standalone movie, saying it could be a done deal if they can find the right schedule: “I’ve talked to Kevin Feige about it. We’re creatively really compatible.  I think we both agree that the character is right for a standalone, it’s just a case of timing at this point for both Marvel and myself.”

Johansson was clearly keen to discuss a possible Black Widow flick and its potential roadblocks, explaining, “Marvel has a really huge roster. They’re looking four years ahead. I also have a lot of things that I want to do,” before adding, “If I did it, I would dedicate myself completely to making it amazing. It would have to be the best version that movie could possibly be. Otherwise, I would never do it.”

There are some doubts creeping into Johansson’s mind, clearly, as she states: “[I] don’t know if I have the capacity for it. I think the fans were adamant about it, it could be done. It should be done, probably.”

So what would a Black Widow movie look like? ScarJo, thankfully, has some ideas, “It’d have to be done the right way, though. It’d really have to be its own standalone and its own style and its own story. But there’s a lot of great stuff that you could do with it. It could just be awesome.”

It’s not a definitive yes but, hey, it’s not a gut-wrenching no either. Johansson wants to do it at some point if everything falls into place. Marvel, the ball is in your court.

Read more about Scarlett Johansson and her latest release Ghost in The Shell in the latest issue of Total Film magazine, on sale now. Buy future issues here.