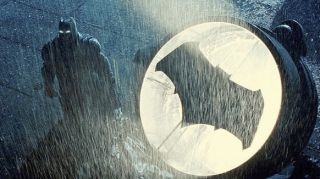 The Batman, starring Ben Affleck, has suffered a lot recently: Affleck has stepped down as director, there’s been a rewrite of the script and now DC head honchos are looking at a clean creative slate and a new release date for Ben Affleck’s first solo outing at Batman. He’s gonna need more than Bat shark-repellent to fix this Bane-sized problem.

Forbes has lifted the lid on the production’s many, many problems from a potential complete rewrite of the script to not exactly offering assurances that Ben Affleck will even stay on as the Caped Crusader. In fact, it’s going to be a “fresh start” for the movie when a new director (rumoured to be War for the Planet of the Apes helmer Matt Reeves), with the placeholder release date of 2018 being shuffled back to 2019.

What’s more troubling is, especially with Affleck’s grumbles about the questioning over a script, the story might need a “complete rewrite.” Where would that leave Joe Manganiello (previously cast as Deathstroke) or, indeed, the future of DC’s Entertainment Universe, which will surely be centred on the successes of The Batman?

If there’s one thing for certain, it’s that everything about this movie is now uncertain. So, uhh, good job guys, you screwed up the unscrewup-able (I’m so darn mad I’m inventing new words).