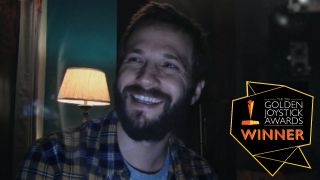 Logan Marshall-Green has been awarded Best Performer at the 2019 Golden Joystick awards for his role as David in the desktop thriller Telling Lies. In Sam Barlow’s detective FMV game, Marshall-Green plays David, a man caught in the tangled web of four people who have been brought together by one lie. I’m being deliberately vague here because even the names and occupations of the characters in Telling Lies are spoilers in the overall narrative, but Marshall-Greens performance anchors the whole story and holds a dramatic weight that really pulls you into the intrigue of the story.

Telling Lies is a desktop detective game where players are tasked with looking through an NSA database filled with recorded clips of personal conversations of four people, Marshall-Green’s character being one of them, unaware that they have been surveyed. The player has the ability to type keywords into a search bar and watch the relevant live-action clips, trying to piece together timelines, events, and interactions.

Following the same structure as Barlow’s previous game, Her Story, performance is critical to this type of storytelling. The gameplay directly involves players dissecting a character’s expressions, keep the NG a close eye on every side glance, facial expression, and a slight difference in body language. It’s a hefty feat as an actor, but Marshell-Green delivers an unforgettable performance as a conflicted man with secrets and layers of personality. Watching him, Alexandra Shipp, Kerry Bishé and Angela Sarafyan (who play the other three characters) creates a spellbinding experience and conjures an intense mystery of who is lying and who is telling the truth.