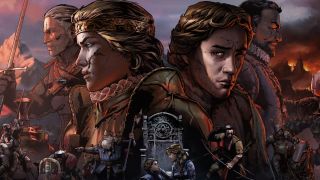 Thronebreaker: The Witcher Tales has had a surprise release on Nintendo Switch.

The re-release has dropped onto the Nintendo eshop for $19.99/£16.99 out of the blue, with CD Projekt Red's UK head of communication confirming the new release on Twitter.

The card role playing game, that's based on The Witcher's Gwent card mini-game, sees you take control of Meve, the queen of Lyria and Rivia, as you have to make tough choices that will have unforeseen consequences. Basically, despite the isometric perspective, lack of Geralt, and card game, this is still very much a Witcher game. Have a watch of the new trailer below.

In our original review of Thronebreaker, Lucas Sullivan enthused: "Thronebreaker isn't just a great spinoff of The Witcher, or just an excellent card game - it's a spectacularly crafted RPG that'll delight anyone who loves a good story wonderfully told." If that isn't going to sell you on it, nothing will.

It's been a pretty great start to year for Witcher fans, with the TV show's soundtrack landing on Spotify, book author Andrzej Sapkowski giving delightfully blunt interviews, and CD Projekt Red signing a new contract with Sapkowski, there's every chance The Witcher 4 could be in the works. This surprise release is yet another welcome coin being tossed at our Switcher (sorry, I couldn't resist).

Feeling like you could do with a new game? Why not check out our list of the best upcoming games of 2020.