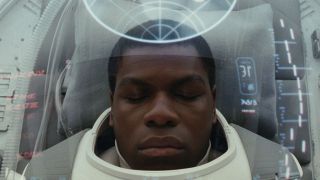 John Boyega may be getting ready for his swansong as Finn in Star Wars: The Rise of Skywalker, but he’s also been sharing his opinions on the divisive eighth episode in a galaxy far, far away.

Boyega revealed in an interview with Hype Beast that he didn’t agree with some of the decisions made in Star Wars: The Last Jedi, especially compared to its predecessor: “The Force Awakens I think was the beginning of something quite solid, The Last Jedi, if I'm being honest, I'd say that was feeling a bit iffy for me.”

While Boyega doesn’t get into specifics, he explains, “I didn't necessarily agree with a lot of the choices in that,” while hinting it may have had something to do with the major characters being kept apart through much of the movie. “It was hard for all of us, because we were separated,” he says, perhaps referring to Daisy Ridley’s Rey spending the majority of the movie on Ahch-To with Mark Hamill’s Luke Skywalker while he and newcomer Rose Tico (Kelly Marie Tran) headed off to the casino planet of Canto Bight in a separate arc.

But Rise of Skywalker could bring the trio of Finn, Poe, and Rey together and reverse Boyega’s frustrations, as he teases: “I guess the original Star Wars films there was much more of a trio feel where it was essentially about Luke's journey, but Han and Leia there was a strong dynamic, which I think, I don't know how quickly we're going to be able to establish that long-term dynamic with [Rise of Skywalker]. But if it's exploring that dynamic, then that would be cool.”

If this is going to be Finn’s farewell, at least he’s going to do it surrounded by his friends. That would make us (and Boyega) very happy indeed.

Catch up on everything from The Phantom Menace to The Last Jedi (and beyond) with our complete Star Wars timeline.