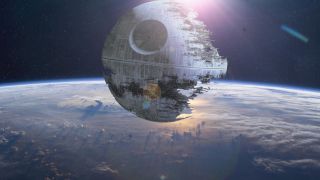 Don’t ever say Disney never spoil us. Star Wars: Rogue One has a whole host of new TV spots (that’s a whopping 27 now, in case you’ve lost track), a new international trailer showing off a Death Star test, and a clip, confirmed by Gareth Edwards to be from the opening minutes of the movie, of Galen Erso being told to return and build the Death Star.

Be warned, if you want to see Rogue One completely spoiler free you shouldn't go any further. Otherwise, let’s dive in.

The clip of Galen Erso, helpfully titled ‘Come Back’, shows Jyn’s father, played by Mads Mikkelsen, being asked to, uhh, come back to the Empire.

Ben Mendohlson hams it up beautifully as Director Krennic, declaring, “You have to start somewhere” after Galen warns him, “You’re confusing peace with terror.” You’d best believe this confrontation isn’t the end to the power struggle between these two.

The fourth international trailer has also dropped and, if you’ve been going over every trailer with a fine toothcomb, you probably won’t find anything new jumping out at you except the shot at 0:51. It looks like desert moon Jedha, complete with super-ancient Jedi temple, is being fired on by what looks like the Death Star. Colour me intrigued.

Feast your eyes below on what is probably the definitive trailer for Rogue One; everything is here and ready to lovingly melt your eyeballs from pure adrenaline.

It wouldn’t be a Rogue One round-up without K-2SO being just a bit brilliant. So if you’re missing out on your daily Kaytoo fix then shame on you. But you can change that with the TV spots below.

K-2SO is bopping Imperial guards on the head and giving Diego Luna some serious side-eye. What could be better?

TV spot numero twenty-six-o shows an amazing shot of the Jedi Temple on Jedha (it’s almost as if it’ll play a big role in the story…) and Jyn facing down a TIE fighter whilst looking like she’s carrying a limp. Poor Jyn.

The final TV spot (so far, anyway) highlights the Empire in all of its evil glory. But, don’t worry, the Rogue One team have hope and a helluva lot of rockets. Stick with the rockets, Jyn!

Directed by Gareth Edwards and starring Felicity Jones, Diego Luna, Ben Mendelsohn, Forest Whitaker, and Mads Mikkelsen, Rogue One: A Star Wars Story is released in the UK on December 15 and the US on December 16.

We're entering the home stretch marketing-wise for the first spin-off set in a galaxy far, far away. In just over a month's time, dedicated hordes of Force fans will be in line to catch Star Wars: Rogue One. This week saw a bunch of new behind-the-scenes pics land AND a cracking TV spot to remind us of its imminent release. For those who can't wait that long for fresh footage - here's a new trailer!

Like previous trailers this international preview covers the same basic story beats: the Rebels' fight to steal the Death Star plans. Outside of that, there's several glimpses at new bits n' pieces and potentially a couple of big revelations.

Feast your eyes upon it below:

Lovely as ever to see a spot more of the OG Dark Sith. This time Darth Vader turns around right as... well, it's edited to look as if Felicity Jones' Jyn Erso is approaching him with a weapon. It's probably just a moment from his discussion with Krennic, spotted in earlier teasers.

The big reveal arrives early on. We see a young Jyn talking with a woman who places a crystal around her neck, telling her to "Trust the Force." That's Jyn's mother, played by Valene Kane. Early casting reports implied that the actress wasn't on set for long, so her brief time gifting her daughter a crystal may be her main purpose in the movie.

Why's that crystal so important? Okay, well, it might not be. Could be that it's just a sentimental token Jyn holds dear to remind her of what her mother once told her.

Or, it could be a Kyber crystal.

These crystals hold great value in the galaxy; they're used to make lighsabers and the Death Star laser. They're also located on Jedha - that sunny location we've seen in trailers that's teeming with Stormtroopers. No wonder really if the planet is home to this incredibly powerful material.

Directed by Gareth Edwards and starring Felicity Jones, Diego Luna, Ben Mendelsohn, Forest Whitaker, and Alan Tudyk, Rogue One: A Star Wars Story is scheduled to open in the UK on December 15, 2016, and in the US a day later.

Update: October 13, 2016 - new Star Wars: Rogue One trailer has everything you want: X-Wings, AT-STs, and Vader

The second trailer for Star Wars: Rogue One has just landed and while the first one introduced us to a new story (see below), this one reminds us that we're still talking about Star Wars. X-Wings, AT-STs, and Darth Vadar are just a few of the recognisable moments that will make hardcore fans grin. Stop what you're doing and watch the second Star Wars: Rogue One trailer below.

Sadly, Darth Vader doesn't get any lines in this trailer but that's not surprising as he probably won't have many lines in the actual movie either. The other important thing to notice is that this trailer confirms what's long been talked about - that Jyn's father is the one who designed the Death Star and that her connection with him is integral to the Rebels' mission.

Plus, there's also a new Rogue One poster to go along with the new trailer. Disney really are spoiling us, aren't they?

Aside from all those athletes achieving remarkable feats, the Rio Olympics has now given us something else to admire: the brand new Star Wars: Rogue One trailer. Teased earlier this week, this full-length preview is now online and available for repeated viewings. Check it out below:

While we already saw a fair amount of footage in the first trailer, and picked it over for every morsel of info, today's trailer delves a little deeper into the Gareth Edwards-directed movie. Opening on Forest Whitaker's Saw Gerrera filling in Felicity Jones' Jyn Erso on the state of affairs, we're thrown into the plot right off the bat. Mon Mothma crops up briefly to recruit Jyn, before she starts to rally her troops.

Cut to: mad battle sequences soundtracked by shades of John Williams' score. It has distinct echoes of A New Hope, and definite similarities to The Force Awakens. But it's got it's own flavor too. There's loads of new footage showing off the various planets (Scarif and Jedha, by the looks of it) and the rebels in action (Donnie Yen's warrior Chirrut Imwe gets a badass one-liner). This is one hell of a trailer.

It's stirring stuff, certainly, but not a patch on the moment we've all been waiting for. One of the most notorious figures in the Star Wars series, whose presence was rumored for months, finally shows up in the last shot. Yes, it's Darth Vader. What else is there to say?