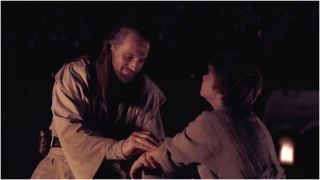 Star Wars: The Rise of Skywalker will bring the Skywalker saga to its end. Which, for any Star Wars fan, sounds slightly bewildering. How will this story, which has been ongoing for 40 years, conclude? Can the Jedi beat the Sith? Or will both orders finally end? Whatever the case, we're in good hands with J.J. Abrams, who previously helmed The Force Awakens.

However, that's not to say the director didn't look elsewhere for help. Making a successful standalone movie is hard enough, let alone one that concludes the trilogy of trilogies. There was, though, one person who could help bring everything together – the key to all of this: George Lucas.

Abrams had a crucial meeting with him during prep. “He had a lot of things to say about the nature of the Force, the themes that he was dealing with when he was writing the movies,” Abrams reveals to our sister publication Total Film in their latest issue. “Yes, there were some conversations about Midi-chlorians – he loves his Midi-chlorians. But it was a very helpful thing. Sitting with him is a treat, just to hear him talk, because it’s fucking George Lucas talking about Star Wars. I always feel it’s a gift to hear him talk about that stuff. Because the effect that he had on me at 10 years old is utterly profound.”

You can read the full article, which features an in-depth look at Star Wars: The Rise of Skywalker – including quotes from Abrams, Daisy Ridley, John Boyega, Oscar Isaac, and Anthony Daniels – in the latest issue of Total Film magazine, which reaches shelves on November 15.