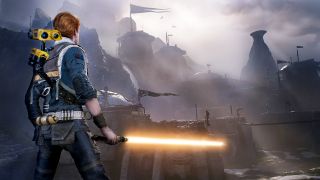 Cue the scenes of inter-planetary celebrations, as Star Wars Jedi: Fallen Order pre-order bonuses are now available for all. While EA and Respawn Entertainment didn't lock away any big chunks of gameplay as rewards for picking up the game early, they did hold back some lovely customization options. That includes one of the most important choices you can make in the game: which color you want your lightsaber to be. Now all players can turn it orange and let their ancient weapons thrum with the power of citrus and creamsicles.

Star Wars Jedi: Fallen Order came out on November 15, meaning the pre-order exclusive content only remained exclusive for two months. That's an observation, not a complaint - I wish everybody unlocked pre-order bonuses a couple months after their games came out (or never offered them to begin with). Here's the full list of cosmetic options that are now unlocked for all players.

There are still some customization options that aren't available for all - several skins for BD-1 and the Stinger Mantis were offered as retailer-exclusive bonuses or rewards for purchasing the deluxe edition of the game. But let's be real, the lightsaber stuff is the big deal here. Just remember that you'll need to reach the point in the game where you can customize your saber before taking advantage of those new options.

Along with unlocking pre-order content, Respawn Entertainment made some tweaks and bug fixes for Fallen Order. That includes disabling the ability to explode rockets with the Photo Mode camera, the most secret and powerful Force technique of them all.