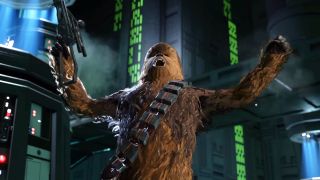 File this one under "expected but still good to know": Electronic Arts has indicated that the next Star Wars Battlefront game will come out in fall 2017. The company had previously said the multiplayer shooter would arrive sometime next year, and EA chief financial officer Blake Jorgensen confirmed in a conference call with financial analysts yesterday that it would arrive "a year from now" - just in time for the holidays.

"We're working very hard on making sure that it's an extremely deep and engaging offering," Jorgensen added before moving on to other upcoming EA titles. Yeah, earnings calls aren't typically the place for hot new gameplay details.

The first Star Wars Battlefront (technically the third main Battlefront game, or second to have that exact title) came out in November 2015, just in time for both the holiday rush and to tie in with the theatrical release of Star Wars: The Force Awakens. Aside from the free Battle of Jakku DLC, it was focused exclusively on events from the original Star Wars trilogy. EA has confirmed that the next Battlefront will pull "from the new movies".

If you're thinking that holiday 2017 release date puts the next Battlefront perfectly in line for a crossover with Star Wars 8, you are so not wrong.