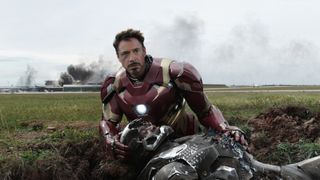 Robert Downey Jr may not be too keen on Iron Man 4, but he's more than happy to show up in Marvel's other superhero movies.

During Captain America: Civil War - which pits Downey's armored avenger against Chris Evans' Steve Rogers - Tony Stark shares some great moments with Tom Holland's brand new Spider-Man. Thankfully, it won't be the last time the webhead and shell-head share the screen, as Sony have confirmed that Downey has signed on for Spider-Man: Homecoming. Check out the tweet below...

Given Downey's recent not so subtle hint that this was in the works this news isn't all that surprising, and it makes perfect sense that Sony would want to capitalise on their connection to the Marvel universe. Variety's report doesn't state exactly how big of a role Downey will have in the film, but I imagine he'll be used sparingly; this is still Spider-Man's movie and director Jon Watts & co won't want the focus to stray too far from the webslinger.