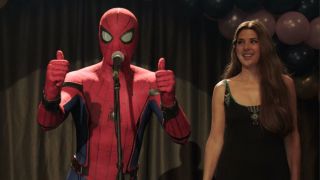 Ask anyone what they most associate with Spider-Man and you’re likely to get one of only a handful of answers. Uncle Ben? Sure. Catching thieves just like flies? Maybe. The head-tingling Spidey-Sense? That’s gotta be a top three entry, right? Well, not in the MCU. Spider-Man: Far From Home will introduce a new name for Peter Parker’s trademark power – The Peter Tingle. Stop laughing at the back.

Tom Holland has revealed that the Peter Tingle is “the [MCU] version of the Spidey-Sense” during an interview with ComicBook.com. No spoilers here, but it sure sounds like a pet name given to one of Spider-Man’s greatest powers by Aunt May. That’s judging by the framing of the question around the Peter Tingle, which involves a mention of “When family members mention your Peter Tingle.” That’s… a thing.

So, yep. As far as we’re aware, the Spidey-Sense is now called the Peter Tingle in the MCU. Love it or hate it, it’s (probably) here to stay for a while.

Will it be a big change? Probably not. Surprisingly enough, the Spidey-Sense actually hasn’t factored into Peter Parker’s character all that much in the MCU. For a character trait right up there with ‘With great power must come great responsibility,’ it’s been a big, telling gap in Spidey’s repertoire.

The webhead uses it very briefly to send a large chunk of metal back at Bucky Barnes in Captain America: Civil War and, of course, his hair stood on end during the invasion of Earth in Avengers: Infinity War but, apart from that, almost nada.

Maybe it’s a weird part of Sony’s agreement to lend Spider-Man over to Marvel to keep certain things away from the MCU entirely. More likely than not, it’s a choice on Marvel Studios’ part to differ the character enough from its past incarnations but, still, it doesn’t make the decision any less eye-catching.

Not even your Peter Tingle will help you figure out our list of the best superhero movies around until you read it.