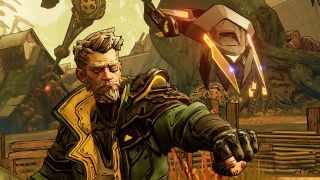 The Christmas break is just around the corner for many of us, so it's time to start mulling over which holiday game you'll be playing - and these cheap game deals may help make the decision for you. You can currently get a hefty discount on Borderlands 3, but there's also a reduction on Star Wars Jedi: Fallen Order and PS4-exclusive Spider-Man Game of the Year Edition. In some cases, you can save up to $25 - not bad for games that have only been out a couple of months.

To begin with, Best Buy has reduced Borderlands 3 on PS4 down to $34.99. That's a saving of $25, which is good going for a looter shooter that continues to impress. Don't worry if you're an Xbox gamer, though - it's $34.99 on Xbox One as well. The same goes for the Borderlands 3 Super Deluxe Edition (which includes the Season Pass, a steelbook, and bonus content) for $79.99 on PS4 and Xbox One instead of $100.

Then there's Star Wars Jedi: Fallen Order for only $39.99 instead of $60 at Walmart on both PS4 and Xbox One. Considering the glowing reviews it's received, that's a real bargain (and it's not the only offer from a galaxy far, far away either - this Star Wars merchandise has been slashed in price too in some cases).

Finally, Spider-Man Game of the Year Edition for PS4 is also on sale. It's being sold by Walmart for just $19.99, which is significantly cheaper than the standard $40 price. It was one of our favorite games from 2018, so that's not an offer to pass on.

Borderlands 3 (PS4) | $34.99 at Best Buy (save $25)
There are many reasons to try this raucous shooter, but one of the best would be that price - it's excellent value. You can also get the Super Deluxe Edition for just $79.99.View Deal

Borderlands 3 (Xbox One) | $34.99 at Best Buy (save $25)
This tongue-in-cheek looter-shooter is also heavily reduced on Xbox One, and it's the same tempting price. Again, the Super Deluxe Edition is $79.99.View Deal

Star Wars Jedi: Fallen Order | $39.99 at Walmart (save $20)
That's a massive saving on one of this year's biggest games, and it's well worth capitalising on before it's gone.View Deal

Spider-Man Game of the Year Edition | $19.99 at Walmart (save $20)
This is an excellent PS4 exclusive that's absolutely worthy of your time if you haven't tried it already, especially when it's got all the DLC included.View Deal