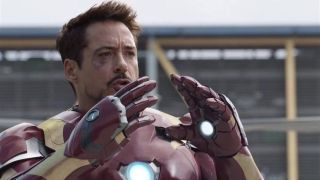 Robert Downey Jr. will reprise his role as Tony Stark in the Disney + show, 'What if,' Jeff Goldblum revealed while playing with puppies. Everything in that sentence is 100% true, as wild as it might sound.

In an episode of Buzzfeed Celeb's 'Plays With Puppies,' Goldblum spoke about his experience voicing the Grandmaster for 'What if…?' and revealed that at least one episode will star Tony Stark as Iron Man, and that Robert Downey Jr. will lend his voice to the role.

"I went to the Disney studios and I recorded the Grandmaster’s voice for an episode of a show that’s gonna be on Disney+ that’s called 'What If," said Goldblum. "This episode included the Grandmaster, and Iron Man, so Robert Downey will do a voice in that," Goldblum said without a wink of insincerity. You can see for yourself with this time-stamped video of the reveal.

'What if…?' is an animated anthology series premiering on the new Disney+ streaming service in 2021. As the title implies, the show will answer hypotheticals on what might have occurred in the MCU had events transpired differently.

Robert Downey Jr. as Tony Stark is the most surprising addition, as the actor has spoken recently about distancing himself from the role and the MCU, not to mention his rather definitive death at the end of Avengers: Endgame.

Pick up a new TV for best Disney+ viewing and save a bundle with our guide to the best Black Friday TV deals.