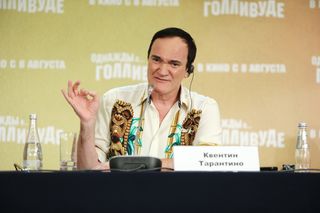 Quentin Tarantino's self-imposed rule to only direct 10 feature films has quickly become the stuff of Hollywood legend. Will Tarantino's last movie, following his 9th film, Once Upon a Time in Hollywood, be his long-rumoured R-rated Star Trek movie? A third Kill Bill movie? Or, as the director has now hinted, a horror movie?

"If I come up with a terrific horror film story," Tarantino said at an international press conference, via The Independent. "I will do that as my tenth movie. I love horror movies. I would love to do a horror film." The director has dabbled in horror before, having starred alongside George Clooney in the movie From Dusk till Dawn, a movie he also wrote the screenplay for (Robert Rodriguez directed the movie).

Of course, Tarantino may not even make it to 10. “If it’s really well received, maybe I won’t go to 10," he told GQ regarding Once Upon a Time in Hollywood, which recently topped the $100 million mark at the US box-office. "Maybe I’ll stop right now! Maybe I’ll stop while I’m ahead. We’ll see.”

Brad Pitt, who stars in Tarantino's Once Upon a Time and was also interviewed by GQ, assured that the director certainly is not joking around when it comes to his 10 movie quota. “No, I don’t think he’s bluffing at all,” he said. “I think he’s dead serious. And I kind of openly lament that to him, but he understands the math of when he feels like directors start falling off their game. But he has other plans and we’re not going to have to say goodbye for a long time.”

Once Upon a Time in Hollywood reaches UK cinemas on August 14. Where does the movie rank among Tarantino's filmography? Check out our best Quentin Tarantino movies ranking.