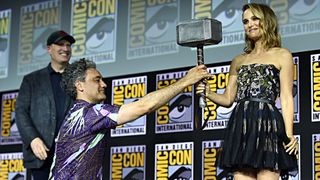 Bye, bye Thor; there’s a new Goddess in town. Natalie Portman’s grand MCU return in Thor: Love and Thunder was undoubtedly one of the best and, yes, shocking (pun absolutely intended) moments of SDCC 2019. Director Taika Waititi has now christened the new twist on the character, given her a brand-new name that might be familiar to fans of the comics.

Replying to Eva Victor on Twitter (who’s well worth a follow – she’s hilarious), Waititi dispelled any notion of Natalie Portman’s character being reduced to merely a ‘Female Thor.’ In Love and Thunder, she’s Mighty Thor.

That takes its cues from Jason Aaron’s iconic God of Thunder run in the comics. In one arc, Foster becomes the Mighty Thor after Mjolnir no longer deems Thor worthy and, instead, finds its way into the arms of Foster. That could also clue us in on OG Thor’s arc in the movie – as Mjolnir is technically MIA in the current timeline after Captain America dropped it off back in Asgard at the end of Avengers: Endgame.

Not only do with have a newly-named Thor in Love and Thunder, we also have news that could strike a hammer blow to hopes of the Asgardians of the Galaxy adventure ever taking off. James Gunn has said, via Instagram, that the fourth Thor movie is taking place before Guardians of the Galaxy 3.

While the Guardians typically do their own thing in terms of the Marvel timeline (Guardians 1 and 2 took place weeks apart despite there being half a dozen MCU movies in the interim), those expecting a post-Endgame space voyage with Thor and the Guardians might be left sorely disappointed after Gunn’s confirmation.

Catch up on all of the big footage reveals from across the weekend with our complete San Diego Comic Con 2019 trailers hub.