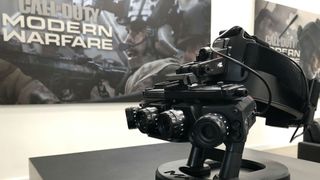 Update: Activision has officially debuted the Modern Warfare Dark Edition night vision goggles with a first look at the overall package. You can also see them in sort-of action, at least in the sense of somebody wearing them on their head, in this product video from GameStop.

Here's what the Modern Warfare Dark Edition looks like. Aside from the goggles, it also bundles in a Steelbook case, three operator packs, and a special in-game knife and calling card.

There's no further information at the moment on things like price, but it looks a lot like an updated version of the night vision goggles that formed part of the Modern Warfare 2 collector's edition. Those went for around $200 at the time but theres no way of knowing what this bundle will involve in terms of price.

Like the previous Modern Warfare 2 goggles there appears to be some IR LEDs and a single camera lens at the front (those extra lens apparently just for show) and a battery pack on the rear of the head strap. There are then two adjustable eye pieces to peer through. Build-wise it's plastic but solid, and you can flip the headset up for when you want to see boring natural light or maybe make a phone call.

And, here's what they look like on, with me for scale:

We'll likely know more when the full multiplayer reveal goes live on Thursday August 1st, 10amPT / 6pm BST. In the meantime you can read up on the return of Modern Warfare killstreaks.