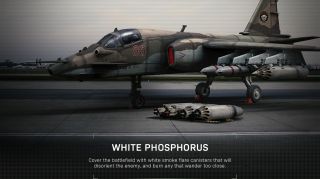 Ahead of the full Call of Duty: Modern Warfare multiplayer reveal, Activision recently announced that the reboot will bring back one of the series' most beloved features: killstreaks. As you rack up kills in multiplayer, you'll get access to new and powerful weapons and vehicles, just like the old times.

Activision shared three of the reboot's killstreaks on Twitter. The first is an old favorite: the Juggernaut from Call of Duty: Modern Warfare 3. This killstreak gives you a suit of armor and a big-old heavy machine gun, basically turning you into the Chain Commander from the original Star Wars Battlefront 2.

Then there's the Infantry Assault Vehicle (presumably the IAV to the UAV), a small tank equipped with a .50 caliber machine gun. That said, the most powerful - and harrowing - killstreak may be White Phosphorus. Its description says it will "cover the battlefield with white smoke flare canisters that will disorient the enemy, and burn any that wander too close," which I reckon undersells the potency of this particular chemical.

White phosphorus is kind of like a worse version of the Agent Orange herbicide used in the Vietnam War. It was more explicitly and widely weaponized, albeit nominally as a smokescreen, and its immediate effects are far more severe. Exposure to white phosphorus can cause myriad diseases and pretty much melt your skin off. I don't remember seeing it in a Call of Duty game before, but I definitely remember it from Spec Ops: The Line, where it was used to quite effectively illustrate the horrors of war. If it's as potent in Call of Duty as it was in Spec Ops, I reckon white phosphorus will be a popular killstreak indeed.

Killstreaks have been absent from the past few Call of Duty games, so it's exciting to see them return in the Modern Warfare reboot. Coupled with the new Gunsmith weapon modding system, they could reinvigorate the series' sometimes overly familiar multiplayer.

Speaking of multiplayer details: here are all the Call of Duty: Modern Warfare maps that have been revealed.