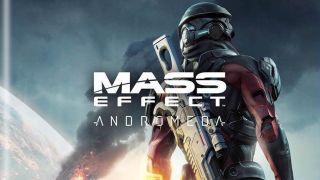 Electronic Arts has a big N7 Day planned for Mass Effect: Andromeda, but Best Buy has already jumped the thermal clip. The retailer posted box art for both the game's standard and deluxe editions, as well as a synopsis that reveals the game will include four-player co-op.

Looks like papa Ryder again, judging by the name scratched into that N7 armor. You'll actually play as his son or daughter but dad will still play a key part in the campaign. And I don't have any inside info about this, but you should probably start preparing for his tragic death scene ahead of time. Just saying.

That looks like an Ark Ship burning in the distance of the Deluxe Edition box art. That's very bad, since those are the colony ships that bring humanity and its allies out to the Andromeda galaxy in the first place. We don't know what bonus goodies the deluxe edition will give buyers yet, but we do know it's $10 extra ($69.99 versus $59.99, UK price TBA).

Aside from box art, the biggest new detail from the listing is the fact that Andromeda will include an "up to 4 [player] player multiplayer mode". Mass Effect 3's multiplayer set squads of four operatives against waves of NPC  enemies, and it tied into the single-player campaign by boosting your "Galactic Readiness" rating. Despite some quirks, it was more fun than a multiplayer mode added to the last part of a single-player RPG trilogy had any right to be. Hopefully Andromeda's multiplayer will build on and refine those fundamentals.

Here's the full synopsis for your perusal.

Mass Effect: Andromeda takes players to the Andromeda galaxy, far beyond the Milky Way. There, players will lead our fight for a new home in hostile territory as the Pathfinder - a leader of military-trained explorers. This is the story of humanity’s next chapter, and player choices throughout the game will ultimately determine our survival.

Chart Your Own Course in a Dangerous New Galaxy

Unravel the mysteries of the Andromeda galaxy as you discover rich, alien worlds in the search for humanity’s new home

In this new chapter of Mass Effect, meet and recruit all-new, interesting characters caught up in an epic space saga filled with mystery and galactic conflict

Build a Formidable Hero With Amazing Weapons, Powers and Tech

With a much more flexible skill and weapon progression tree, you can replicate your play style to make you unstoppable against new, powerful alien enemies

For 1 player or up to 4 in multiplayer mode