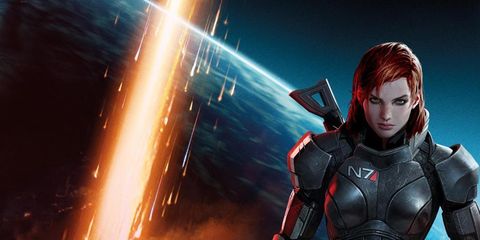 Like countless others, we invested well over a hundred hours into the science fiction space opera that is Mass Effect. We rose to the rank of Spectre, the intergalactic supercops working for the U.N.-like Galactic Citadel; we learned about the Reapers, an ancient robotic threat with intent to destroy all organic life; and we put together a group of soldiers to delay the Reaper attack, leading a squad on a suicide mission into the unknown. And now, with the arrival of the final act of the trilogy, we were promised a finale that would bring this tale together in unexpected yet satisfying ways.

For the most part, Mass Effect 3 delivers on these promises, with a satisfying conclusion chock-full of white-knuckle action and a narrative fitting of the Mass Effect name.

The Reapers have arrived on Earth, and their goal is nothing short of genocide. With enemies beating down the doors back on the human homeworld, Shepard is sent off-planet to bring the combined might of the cosmos back with him to fight a battle – not just for his squad, but for all biological life in the galaxy.

Above: Check out our video review

It’s not that simple, sadly. The world(s) of Mass Effect are rife with intergalactic in-fighting, and mending the galaxy’s thousand-year-old wounds proves more difficult than convincing a ragtag group to throw away their lives on a suicide mission. Shepard isn’t helping a few people get revenge – he’s attempting to solve deep-rooted cultural issues between entire alien races that existed when humans were still rubbing rocks together and praying for fire.

And that’s essentially the entire point of the game: get everyone ready for a grand-scale, climactic war. In ME2 we had to deal with characters arguing over their race’s histories, complaining about 400-year-old wars or political disagreements. Now, we got to tell them to shut up and deal with it. It was great to finally be allowed to take off our gloves and get with the fixing, forcing the universe’s races to put aside their differences for the sake of all life.

Our choices in how we handle the issues shape the universe, and every action we take adds to Shepard’s Galactic Readiness meter, a representation of his success in building the army that will come back with him to defeat the Reapers. From scanning remote planets for supplies (which has been revamped from the last game to be more fulfilling and entertaining) to completing objectives for strangers, everything affects the Galactic Readiness, selling the mood of a universe at war.

Above: Expect to spend a lot of time arguing with aliens

Ready for a fight

Also adding to this meter is the multiplayer, which was a somewhat surprising addition to the series. Successful play in the different maps adds to the Galaxy At War meter, which boosts the singleplayer Readiness. It’s a subtle tie-in, but it works well, and adds incentive to play even for those who usually would shy away from multiplayer.

Even without the tie-in, however, it’s definitely worth trying out. The game’s several maps are genuinely fun, providing a unique spin on the typical wave-based cooperative play. Occasional objectives make it more complicated than simply hunkering down and defending, and each level is concluded with a mad dash to the exit, eliciting fond memories of Left 4 Dead. It’s not going to replace your nightly routine of Call of Duty, but it’s fun enough that we’re happy to see it added, and fits right in line with the story of a universe enveloped at war.

As expansive as the multiplayer is, we’re happy to see that it didn’t take away from the core campaign one bit. In fact, we were shocked at how massive and awe-inspiring the single-player missions are. Without warning, regular objectives escalate dramatically, going from run-of-the-mill to explosive, cinematic set piece encounters.

Heading to a remote planet to defuse a bomb will suddenly escalate to the point where it feels like it could be the final mission of any other game. The stakes are that high, and the fate of the galaxy rests delicately on Shepard’s ability to beat the odds and complete a nearly impossible task. And this doesn't happen just once. Oh, no. It's a nearly constant battle against all odds, racing from one planet to the next to prevent the entire galaxy from caving in on itself.