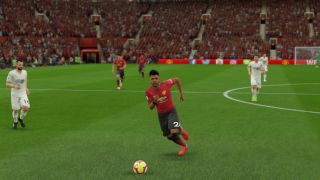 Both Manchester United and Arsenal are said to be looking to bolster their engine room with a certain Southampton midfielder, so what do the Mario Lemina FIFA 19 stats foretell about his potential future at Old Trafford or the Emirates? Let’s take a closer look.

Curiously for a player rated at £30 million, there is only one Mario Lemina FIFA 19 card available: his standard 78-rated gold item. No in-forms, no MOTM, no TOTS. Which at least makes our task here a little easier than when GR broke down the FIFA 19 ratings of Rodri and Bruno Fernandes.

His 78 overall rating suggests Lemina will have some hard work getting into the United side – it’s way off the likes of Paul Pogba (88), Nemanja Matic (86), Jesse Lingard (82) and even Maroane Fellaini (79). It does however tower over Scott McTominay’s lowly total of 71.

We’re dealing here with a card that’s more 70s than your parents’ Abba collection. Offensively Lemina scores 70 for composure, 78 for long shots, 74 for vision, 72 for crossing, and 72 for curve. As for defensive attributes, the Gabon international has 73 for standing tackle, 72 for interceptions and 70 for marking.

Pace is the attribute every FIFA player looks for when making a signing in Ultimate Team, and Lemina scores 77. As for career mode, his potential is a perhaps disappointing 83.

What of the Lemina Football Manager 2019 stats fest? Yep, we’ve got those too, though bear in mind that SI Games’ tracksuit sim rates players out of 20 rather than 100.

Where FIFA 19 awards Lemina lots of 70s, in FM his magic number is 15. He earns that exact rating for first touch, passing, technique, off the ball, acceleration, agility, balance, pace and stamina. Just a couple, then. He fares even better for work rate, with a 16 rating in that department.

Weaknesses in Football Manager include free kicks (8), positioning (8), corners (9) and crossing (9), none of which are terrible scores. Clearly either United or Arsenal are getting a player with few obvious flaws if they can prise him away from St Mary’s.

It’ll be a little while before we know the Mario Lemina FIFA 20 stats rundown, but fans can at least rest easy in the knowledge that his facial scan is already in the game.