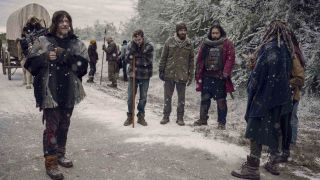 The Walking Dead season 9 finale had a lot to live up to after, y’know, that whole spiky situation last week. Tensions were icy, to say the least and, now, things were even colder thanks to an episode that ramped up the wintry weather conditions.

For some, however, it was a let-down after last week, while others were pleased with the season overall and felt *that* mystery was enough for them to keep watching. So, without further ado: here are the best reactions to The Walking Dead season 9, episode 16.

Winter has finally arrived in The Walking Dead. With the show spending the majority of its time in sweltering Georgia, things never really got too chilly. But snow set in this week, leading to some of the coolest moments in the show, pun absolutely intended.

I waited for snow in The Walking Dead just so I can see a walker get killed like this. I’m satisfied. pic.twitter.com/xOxlQoUCcsApril 1, 2019

So refreshing to see snow in The Walking Dead. #TWDApril 1, 2019

-Ezekiel and Aaron: Not too many at once!Everyone else: #TheWalkingDead pic.twitter.com/2O0PAQVWJ8April 1, 2019

What the hell?? Does Alpha's territory stretch to Florida? They get no snow? #TWD #AMCTalkingDeadApril 1, 2019

#twd SO MUCH HAPPENED in last week’s episode that i’m glad this one was kind of chill (haw haw 🙄). the walkers were amazing though.April 1, 2019

He’s gone from baseball bat-swinging brute to Judith’s saviour. Maybe it’s time to start re-thinking whether we hate Negan. His daring dash into the blizzard to save Rick Grimes’ maybe-maybe-not daughter, warmed our hearts – and everyone else’s too.

Cutest Negan and Judith scene of the season #TheWalkingDead pic.twitter.com/dJsKWjw45UApril 1, 2019

Negan running after Judith got me like #TheWalkingDead pic.twitter.com/sVJM0k2gi2April 1, 2019

Eugene trying not to laugh at Negan's jokes toward Father Gabriel #TheWalkingDead pic.twitter.com/SGKK0B2vD8April 1, 2019

Negan running after Judith with no hesitation #TWD #TheWalkingDead pic.twitter.com/1pNaNyFndBApril 1, 2019

Not everybody was impressed...

Maybe it was because last week’s pike massacre was so darned brutal, but this week didn’t live up to expectations for many. You can’t have deaths all the time, yet maybe placing a deliberately slow-paced episode as your last one for six months isn’t going to please the masses, no matter how good the season has been.

This is THE lamest episode ever. An hour of walking in the snow for some radio static. Wtf. #TheWalkingDeadApril 1, 2019

Should have ended it with last weeks episode, the head on the pike scene was definitely season finale material. This was hands down the worst episode ever.April 1, 2019

That was the most wack , anti-climatic season finale the Walking Dead has ever had. 💤💤💤💤 , thought for sure the great episode last week would of delivered a great one this week. #twdApril 1, 2019

The tension still remained in The Walking Dead season 9 finale, though. Dog, Daryl’s talented tracker pupper, went missing in the snowstorm. Surely they wouldn’t kill off a doggo now? Haven’t we suffered enough?! As it turns out, everything was fine in the end. Phew. That was a tough ten minutes.

How about we just make the show about Negan, Judith, and Dog #TWDApril 1, 2019

me when dog is in any type of danger #TheWalkingDead #TWD pic.twitter.com/DtBmmVtnhbApril 1, 2019

Just who was that on the other end of the radio? That’s a question for The Walking Dead season 10 to (hopefully) answer, but it hasn’t stopped people guessing the person’s identity

Not sure how I feel about the season finale of #TWD #WalkingDead I liked last week's better. Only thing I wanna know is who was on the radio?April 1, 2019

This season of The Walking Dead was easily the best since Season 5, imo. It's a really impressive turnaround from the past two seasons, in many ways, but just the pacing alone is great. Makes me excited for Season 10.April 1, 2019

Need something else to watch now that The Walking Dead season 9 has finished? Here are some of the best new TV shows coming your way.