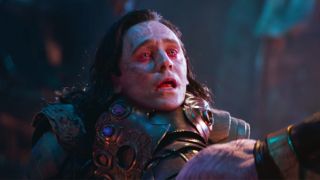 Tom Hiddleston has shared the first real taste of what to expect from the forthcoming Loki TV show heading to the Disney+ streaming service. The Marvel actor revealed that Loki will come up against “more formidable opponents, the likes of which he has never seen” in the new series. And, considering the God of Mischief recently faced down Thanos, that certainly hints at more pain to come in his future. Or should that be past?

Sitting down with MTV News, Hiddleston said the Loki TV show will also feature the eponymous character’s “very specific gifts,” including “his intelligence, his treachery, his mischief, his magic.” He went on to say that “there will be humour in it, for sure,” adding that “a whole other set of challenges” will make themselves known.

Throughout the interview, Hiddleston constantly refers to these unknown ‘challenges’ with a cocksure smirk. “I wish I could tell you what happens, but I can’t,” he teased. Hiddleston, inevitably, knows something – he’s just not telling. A trickster to the very end.

The British actor also confirmed – in case it wasn’t clear enough already – that the “start” of the Disney+ Loki show will follow on from the 2012 version of the character hightailing it during a time travel scene in Avengers: Endgame.

From there, it looks like a tough road ahead for one of the MCU’s favourite sons. Hiddleston, however, sounds like he’s genuinely looking forward to sharing every moment with the world. The stakes look set to be potentially very high in the Loki TV show, which premieres as part of Marvel Phase 4 on Disney+ in Spring 2021.

Want a primer on everything that's happened so far in the MCU? Here's the complete Marvel timeline. Don't mess with it, Loki.