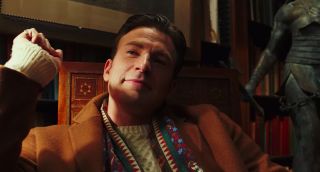 Having taken a deserved break from a galaxy far, far away to work on other projects, The Last Jedi director Rian Johnson returns to cinemas later this year with the murder mystery Knives Out.

The movie begins with a famed crime novelist Harlan Thrombrey (Christopher Plummer) inviting his extended (and very, very sketchy) family to his home. Soon enough, the novelist is found murdered, and Detective Benoit Blanc (Daniel Craig) is brought in to solve the case.

So, who are these suspects?  In an exclusive interview with Total Film, Johnson walks us through who each the characters are and some of their potential motivations for murder.

“He’s Linda’s husband, he helps run her company, and he knows he’s very lucky to be married to her. There’s a scene where they were supposed to be pulling up in a car together, and Don said, ‘I think Richard probably lets Linda drive.’ That’s a very good encapsulation of their relationship.”

“Linda is Harlan’s eldest daughter. She’s very driven, and she very much fancies herself as a self-made woman in the mode of her father. And she has a real estate firm that she runs with her husband and, of all his kids, she has maybe the strongest emotional connection to her dad.”

“Ransom is Richard and Linda’s son, and he’s sort of the ne’er do well of the family. He’s the young, spoiled, rich kid who everybody else in the family resents.”

“That’s Harlan Thrombey’s mother. Nobody knows how old she is. She’s this constant presence at family get-togethers but she never says a word to anybody.”

“Marta isn’t a member of the family, but she’s been Harlan’s private nurse for the past few years and so they’ve grown close and they’ve developed this friendship together. She finds herself embroiled in the mystery after he dies.”

“Harlan is the grandfather, and he’s kind of like the Stephen King of mystery novelists. He’s very successful, and the whole family is sort of under his umbrella as the patriarch. So the setup of the whole thing – and this is not really a spoiler – is that they’ve all gathered for his 85th birthday, and he turns up dead, basically. The entire thing is a family-based murder mystery that stems from that.”

“Walt is Harlan youngest son and Linda’s younger brother. It’s fun seeing Michael playing against type because he’s such a good actor. He always plays strong, intimidating characters, whereas Walt is the little brother who never really found his own way. He kind of just works for his dad’s publishing company and always feels a bit inadequate, I think.”

“I’m trying to think how to best describe him without kind of giving away the joke of the character. He’s always on his phone and probably up to no good on it. He’s very active on the internet and his parents have no idea what he’s doing on there.”

“Rikki is a fantastic comedian and she plays Walt’s very uptight wife. Donna is very frightened of a lot of things in the world, I guess, and she’s very protective of her family.”

“Joni she is Harlan’s daughter-in-law. She was married to another of his sons who passed away. She’s kind of a hippy-dippy, west coast lifestyle guru who has her own lifestyle company.”

“Meg is Joni’s daughter, and she’s been hopping around various east coast colleges for the past few years. She has a nebulous major at a liberal arts college, she’s very progressive, very left wing, and she’s perpetually embarrassed by her mother.” DW

Knives Out opens in US theatres November 27, UK cinemas 29 November. For more on Knives Out, including an interview with Christopher Plummer, pick up the new issue of Total Film magazine, which goes on sale this Friday, 26 July.

If you’re a fan of Total Film, why not subscribe so that you never miss an issue, and you’ll also get exclusive subscriber-only covers like the one below delivered directly to your doormat before it hits shelves? What are you waiting for?