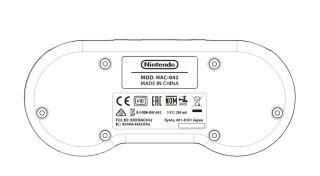 Everyone and their dog knows that Nintendo Switch Online would be infinitely more appealing if it offered SNES games as well as NES games. According to a new FCC application (spotted by Link83 on ResetEra), Nintendo's not only working on bringing SNES games to Switch, it's also preparing a wireless SNES controller to go with them.

The application in question is FCC ID BKEHAC042, which was filed by Nintendo last Friday, August 9, and listed as a wireless game device. A few things stand out here. Most importantly, the application contains the above image showing the back of the controller, the silhouette of which couldn't be more SNES.

It would be nice if we could view the controller from other angles, but unfortunately the files containing other images won't be available until February 6, 2020 under the FCC's 180-day confidentiality agreement. Interestingly, the application for the Switch NES controller, FCC ID BKEHAC033B, received similar treatment. It was filed in September 2018, but its most revealing information was unavailable to the public until March 2019, after the controllers were released during the 2018 holiday.

Knowing this, we can reasonably assume that the SNES controller filed this month will be released before its confidentiality lifts in February, which would suggest a holiday 2019 release date. That's just speculation on my part, but if it holds up, it means the Switch will get an SNES library sometime in the next four or five months.

It's also worth reiterating that we know for a fact this controller is for Switch. As evidenced from the NES controller application linked above, HAC is Nintendo's code for Switch hardware and accessories. The Nintendo Switch Pro Controller uses the same product code.

As for which SNES games will come to Switch, the ones included in the SNES Mini seem like solid picks, though it's also possible Nintendo would avoid or drip-feed those games to avoid devaluing the SNES Mini itself. In any case, Nintendo Switch Online's SNES library will probably be built up over time through monthly additions, much like the NES library. If we're lucky, Nintendo will read the writing on the wall and release a few dozen games around launch to give the SNES selection a boost.

These are the best Nintendo Switch accessories you can buy right now. If it performs well, this in-progress mini Switch dock may well be added to our list.