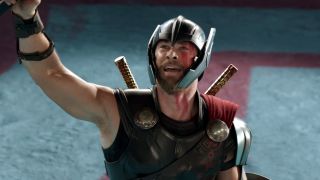 “He’s a friend from work!” Admit it: you’ve already shouted, bellowed, and screeched that at friends, family, and the terrified elderly. The most quotable line from the Thor: Ragnarok trailer  – which Thor proclaims when he sees Hulk in the gladiatorial arena on Sakaar – actually comes from the unlikeliest of places: A Make-A-Wish kid.

That’s right. As Chris Hemsworth reveals to EW, the idea for Thor’s excited, babbling line came from a young boy who was visiting the set during filming thanks to the Make-A-Wish Foundation.

“We had a young kid, a Make-A-Wish kid on set that day,” Hemsworth explains, “He goes, ‘You know, you should say, ‘He’s a friend from work!’”

What with Thor: Ragnarok being roughly 80% improvised, it’s not surprising to see a spit-balled line make it into the final cut, but it’s unbelievably sweet that it comes from the mind of a unwell child who just happened to be on set that day. Let’s hope Marvel will send him lots of royalty checks should they ever create a Friend From Work t-shirt. (Note to Marvel: Make. That. Shirt.)