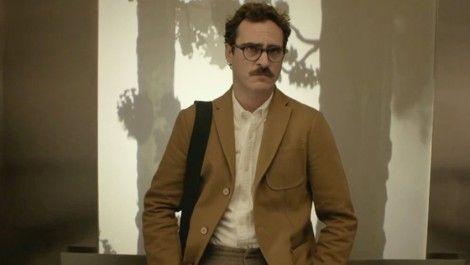 Mobile dating app Tinder was little more than a twinkle in a developer’s eye when Spike Jonze was writing his wry, singular screenplay for Her . But its advent has only made the movie’s imagined future feel more relevant.

In an early scene, Joaquin Phoenix’s lonely writer Theodore scans a selection of audio-only personal ads, in search of a voice that appeals. “Is anybody out there?” one asks, plaintively. The ostensible aim is phone sex – instant gratification – but the real endgame is connection, in any form, with anyone.

Set in a future where technology has advanced while fashion has regressed (high-waisted trousers abound), Her sees recently divorced Theo gradually fall for Samantha (Scarlett Johansson), an artificially intelligent operating system who is first his secretary, then his confidante, and finally his lover.

Recalling last year’s sharp, unsettling Ruby Sparks , she is pre-programmed as his dream girl, based on a brief answer he gives to a question about about his mother. “Love is a form of socially acceptable insanity,” Theo’s neighbour Amy (Amy Adams) reasons, upon hearing the news.

Dating an OS isn’t unheard of in this future, and Jonze depicts it with compassion. A doomed hook-up between Theo and a blind date (Olivia Wilde) is shot in lurching close-ups and feels more artificial and frightening than any of his warm and intimate exchanges with Samantha.

Though Her ’s scenario isn’t exactly an everyday one, the pain, joy and fear that Jonze depicts feels universal. The shifting power dynamic between Theo and Samantha as she begins to dream and hope and move beyond her programming feels painfully authentic.

She clings on and he’s remote, then he invests and she withdraws. Despite a few wobbles, it’s a convincing dance, sustained as much by Johansson’s vivid, vulnerable vocal performance as by Phoenix’s brittle turn.

Nothing in Her ’s world exists for the sake of it: every techno-quirk has something to say. One especially sharp comedic strand sees Amy develop a videogame called Perfect Mom , in which points are won by making other mums jealous and lost by feeding your kids processed sugar.

In a more unsettling scene, Samantha hires a surrogate to have sex with Theo on her behalf, using her voice via an earpiece. That disconnect between sound and touch, between physical sensation and emotional impact, is at the heart of this shrewd, often funny and occasionally brutal exploration of intimacy.

For all its techno-focus, a very human love story about our need for connection. Strange, witty, honest and curiously comforting.