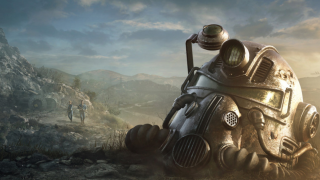 Love collectibles? Love Fallout? You might want to ready your wallet. If you're a Fallout fan, GameStop currently has a nice little selection of Fallout-centric  goodies and other collectibles on sale right now.

If you head on over to GameStop's list of sale items, you'll find quite a few Fallout-centric items up for grabs, which you should grab before they run out of stock, if you're a dedicated fan.

One particularly tasty deal is the Fallout 76 Power Armor Edition, which is just $100 right now, $60 off its typical price. While we found it a bit frustrating when it debuted, criticizing its fetch quests and out-of-date engine, there's still some fun to be had with its "intriguing new beasts to fight" and "fascinating backstory to Appalachia." It's also a game that Bethesda has been aggressively and regularly updating, and they've finally addressed the canvas bag controversy that this edition launched.

If you're more interested in figures, you can snag this cool Fallout 4-inch T-45 Armor Figure for just $5 in addition to the adorable Pyromaniac Vault Boy figure by Funko, also $5. Both are $2 off their normal price of $7.

There are quite a few deals to sift through if you want to show your love for the franchise, but if you're a true Vault Dweller, you'll know a thing or two about scavenging.

Fallout 76 Power Armor Edition is $100 at GameStop | save $60
If you had your eye on this set when it first debuted, the price is even sweeter with $60 off for the game, a wearable helmet, collectible figurines, and more. View Deal

Fallout 4-inch T-45 Armor Figure is $5 at GameStop | save $2
Add a cool little figure to your Fallout collection for less than the price of your daily Starbucks order.View Deal

Funko Fallout - Vault Boy (Pyromaniac) is $5 at GameStop | save $2
These collectible Funko figures are great to decorate your desk or gaming area, and cheap to boot. View Deal

Not into Fallout so much right now? There are plenty of other awesome games out there that you can peruse instead. Be sure to consult our list of the best PS4 games as well as the best Xbox One games if you're ready to move on to another franchise.